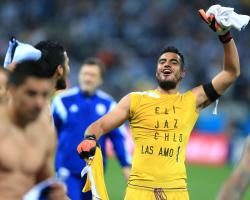 This latest instalment in United's goalkeeper saga suggest the club have sounded out World Cup and Copa America finalist Sergio Romero ahead of the 2015/16 Premier League season.

With David de Gea still looking Madrid bound and tour absentee Victor Valdes being made available to Valencia as a sweetener in any potential Otamendi deal, United have turned to Romero, a keeper renowned for his penalty saving and agility.

Italian journalist Gianluca Di MarzioÃÂ (translation required)ÃÂ has reported that United have offered Romero a salary of around 2 million Euros per season, whilst they face competition from AS Roma.

The 28-year-old keeper has been let go by Sampdoria as the club look to thin their current expenditure on player wages.

Romero signed for Sampdoria from AZ Alkmaar in 2011, but was sent on loan to AS Monaco in 2013 where he acted as backup for the French side's first choice keeper Danijel Subasic.