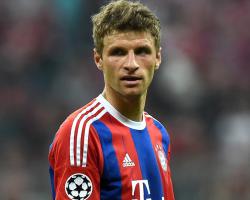 While confirming that offers have been made for the Germany international, Rummenigge said the 100million mark had not been reached but that it would not make a difference anyway.

"There are some players who just don't have any price tag," Rummenigge said

"We would be out of our minds to sell Muller."

While confirming the arrival of Arturo Vidal from Juventus, pending a medical, Rummenigge did not rule out making further signings this summer.

The Bundesliga champions have already signed Douglas Costa, Sven Ulreich and Joshua Kimmich this summer, while Bastian Schweinsteiger, Pepe Reina and Mitchell Weiser have all left and funds are there to be spent.

With Barclays Premier League clubs set to benefit from a lucrative new television deal next year, that could tempt Bayern to invest in players they might normally wait another year for.

"We do have to consider whether we bring our transfer activities for next year forward," said Rummenigge

"It's certainly not going to be a cheaper transfer window (next summer)."

During the meeting with the media, Rummenigge also touched on the future of coach Pep Guardiola.

The Catalan's contract is up for renewal next summer and no negotiations are currently planned, although both Guardiola and Bayern have insisted there is no rush.

"I can't currently think of any reason why Pep would leave us," Rummenigge said

"Maybe we'll just meet for an espresso and clear everything.

"But if Pep doesn't want to stay, our world would not fall apart."

Guardiola has won back-to-back titles in his two years in charge of Bayern, but they have fallen short in the Champions League and that is the title both he and the club desperately want this season.