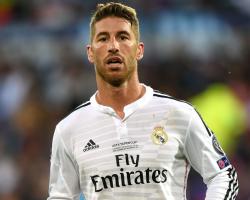 United are willing to exchange goalkeeper David de Gea for Ramos, who is reportedly unhappy about the salary he has been offered as part of a new deal at the Bernabeu.

Ramos and Madrid are yet to resolve their differences, but Benitez insists the defender will remain at Real Madrid.

"I have a lot of respect for (United manager) Louis van Gaal, but Sergio will be staying with us," the Real Madrid manager said at a press conference in Australia prior to the team's friendly against Manchester City.

"He is our player, our captain

I would like to see him (at the club) at the beginning of the season, because he's a key player for us."

When asked whether he was absolutely certain the centre-half would stay, Benitez said: "For me, 100 per cent.

"I insist that it is clear for me and the club, Sergio will be here

Football is a curious world, but Ramos will be staying."

Ramos has won a host of honours - including the Champions League - since joining Real Madrid from Sevilla 10 years ago.

The 29-year-old has been appointed club captain this summer following the exit of long-serving goalkeeper Iker Casillas, who has joined Porto on a two-year deal.