​Manchester United's fixture against Partizan Belgrade last time out in the Europa League marked something of a mini-renaissance for manager Ole Gunnar Solskjaer.

Before that game, they had not won on the road for over six months, but then, like the busses United fans became so familiar with under Jose Mourinho's reign, three away victories came in less than a week.

But any belief that this might be the start of a revival for the Norwegian was abruptly quashed as they ​lost 1-0 to ​Bournemouth in another underwhelming display.

Like with their domestic performances, goalscoring has been the main issue for the Red Devils in the Europa League, as they have registered just two goals in three games. They'll still be favourites to change that however, against a poor Partizan side.

Here's 90min's preview for the game. Aside from that, ​United have a lengthy injury list with ​Paul Pogba set to be sidelined till December and ​Luke Shaw, ​Nemanja Matic and Axel Tuanzebe all expected to be out until after the international break. Long term absentees Eric Bailly and Timothy Fosu-Mensah will also miss out, while Diogo Dalot is a doubt. Meanwhile, the visitors will be without former ​Liverpool, ​Hull City and ​Fulham winger Lazar Markovic who has an abductor problem.

Other than that they have no injuries or suspensions, and top scorer Umar Sadiq - who is currently on loan from Roma - will be their main goal threat up front alongside Takuma Asano, who is technically a former ​Arsenal player despite having never played for them. 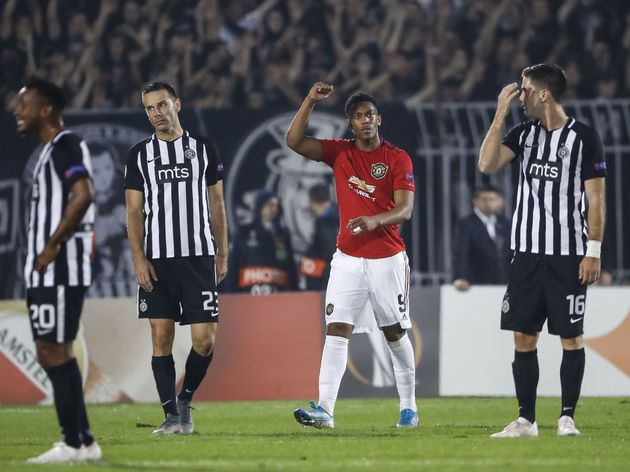 Despite having only been played three times, this fixture is one steeped in the illustrious history of both clubs.

The first two meetings between the two took place in the semi-finals of the 1966 European Cup, where Partizan edged the two legged affair 2-1 on aggregate, after winning their home leg 2-0.

Their next meeting was over 50 years later, when ​Anthony Martial's penalty was all that could separate the sides two weeks ago. Despite their relatively glorious histories, both sides have thoroughly underwhelmed domestically this season.

United's fall from grace since the departure of Sir Alex Ferguson has been well publicised, and they are currently languishing in 10th place in the ​Premier League after a series of poor displays.

Partizan have also been disappointing in the Serbian Superliga, and currently sit 4th place, ten points off of leaders and local rivals Red Star.

For a side who have 27 league titles to their name that simply isn't good enough, and a Europa League run could be a small saving grace for boss Savo Milosevic.

Here's how the two have fared in their last five matches. ​Manchester United haven't exactly convinced so far against poor opposition in the Europa League, but they're still favourites on Thursday night.

Partizan are a weak side, and a team of United's stature should be able to come away with a win.