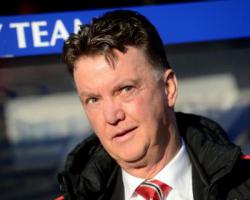 But Van Gaal, who led his native Holland to last year's World Cup semi-finals with a three-man defence, says watching United play in a 4-4-2 formation makes him uncomfortable.

"We have won more with 4-4-2 in a diamond (midfield), but when you analyse the game then we have twitched our asses on the bench," the United manager said.

"I have twitched my ass because we were out of balance

I told my players I was squeezing my ass, but (they said) it was the wrong expression.

"All the matches when we play 4-4-2, like against West Ham United (who United beat 2-1), it was always twitching your ass, and I don't like it."