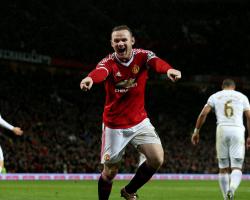 Rooney moved ahead of Denis Law to become the second-highest goal scorer in United's history when he struck with the final goal in the 2-1 win over Swansea on Saturday.

Rooney's first league goal since October could not have come at a better time for his under-fire manager.

But luckily for the Dutchman, Rooney came to his rescue when he deftly flicked the ball past Lukasz Fabianski in the 77th minute.

Van Gaal, who lined his team up in a 3-4-2-1 formation, was hoping for a change in fortunes at the start of the new year, but for the most part, his team served up another dull display.

The 64-year-old will not care too much, however

Rooney's goal buys him more time to turn things around at Old Trafford and his team are now fifth in the league - just two points behind Tottenham.

There was no sign of any Jose Mourinho scarves outside Old Trafford before kick-off.

United's encouraging performance against Chelsea had restored a certain amount of confidence in Van Gaal, it seemed, but what followed in the opening 45 minutes was the same old drivel from the hosts.

Ander Herrera tricked his way into the box in the first minute, but Federico Fernandez put in a crucial block

United did not test Fabianski until the 33rd minute

In reality, it was not much of a test for the Swansea stopper

Juan Mata's quick thinking allowed him to find space in the box from Herrera's quick free-kick, but his shot dribbled into Fabianski's hands.

With three at the back, United had an extra man in midfield, but they were slow to turn defence into attack

Groans were heard as United passed back and sideways with regularity.

It was the ninth successive game that United had failed to score in the first half at Old Trafford.

Ashley Young crossed to Martial, who powered a header in from eight yards

Van Gaal rose to his feet and held his arms aloft

The Ghanaian headed Sigurdsson's cross on to a post and the ball dropped to Angel Rangel, who went down as he jostled for the ball with Matteo Darmian

The travelling fans demanded a penalty, but Jon Moss booked Rangel instead.

Martial broke into the box twice, but failed to test Fabianski and United paid the price

Modou Barrow, given space down the left, crossed to find Sigurdsson, who looped a header over De Gea.

The home fans bemoaned another sloppy goal, but Rooney came to the rescue

After another pacy dribble down the left, Martial flashed the ball across the box and the United captain flicked the ball in.

Fabianski could have equalised in injury time when he came up for a corner, but he headed wide and United held on for a welcome win.