Maradona hits out at Van Gaal 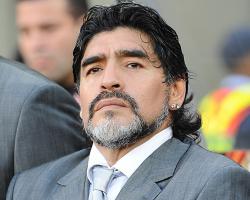 United thought they had pulled off one of the best deals of the summer transfer window when they signed Falcao on a season-long loan from Monaco.

The Colombian came to United with an impressive goalscoring record but, eight months later, he has found the net just four times for the club.

Falcao has been on the bench for the last five games and that has not gone down well with Maradona.

The former Argentina star, speaking at a press conference in Bogota, Colombia, to promote a charity match, criticised United boss Van Gaal for his handling of the two-time Ballon d'Or nominee.

"Van Gaal is not a nice guy," Maradona said when asked about the Dutchman's handling of Falcao.

"Van Gaal is closer to the devil than anything."

The Argentinian, who visited Old Trafford to watch United lose to Liverpool last year, believes the fact that Falcao has had to recover from a serious knee injury has made his adaptation to English football harder.

The 29-year-old was ruled out of the World Cup because of the injury he suffered in January and he has been hindered by a number of niggling problems since he signed for United.

"His time was cut short after the injury and he has to adapt to the move," Maradona said at the press conference shown on the YouTube channel of TV station Canal Capital.

Falcao looks set to be on the bench again on Sunday when United host City in the Manchester derby.

United have the option of buying him for ÃÂ£43.2million in the summer, but the player's form so far this term suggests they are unlikely to do so.