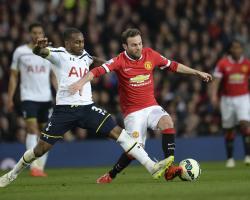 United moved to within two points of second-placed Manchester City at the weekend thanks to a 3-0 hammering of Spurs at Old Trafford.

After eight months of trying, everything seemed to click into place for Louis van Gaal's men.

They easily established a three-goal cushion within 35 minutes thanks to strikes from Marouane Fellaini, Michael Carrick and Wayne Rooney, who put aside the storm created by his 'knockout' kitchen sparring video to hammer in the third and followed it up with a cheeky shadow-boxing celebration.

United's run-in is far from straightforward

Van Gaal's men face Liverpool, Manchester City and Chelsea in the next four weeks and they also host Arsenal on the penultimate weekend of the season.

But Mata thinks a top-four finish will be far more likely if United keep on repeating the kind of display that blew Tottenham away.

"It was a very important victory to finish in the top four since Tottenham are also in the same race," the United midfielder wrote on his blog.

"It was arguably our best first half of the season.

"In those 45 minutes we scored three goals and could have scored some more.

"The team played with a fast, intense and vertical style, also pressing on Spurs' side of the pitch

"Now we must focus on each of the remaining games, and they are not many, in order to achieve our goal, which is to bring the Champions League back to Old Trafford.

"Some of our rivals are also fighting for the same but I hope this win against Tottenham will give us confidence to perform at our highest level.

"I hope next Monday we feel as good as today after playing at Anfield, which is one of the most important games for us."

Mata had gone nearly two months without a league start for United but was drafted into the starting XI following the suspension of Angel di Maria, and the Spaniard did not disappoint.

Mata's vision and creativity helped the hosts carve open Tottenham's defence and despite his slender frame, Mata relished a physical battle with Danny Rose, who clattered into him on numerous occasions.

The ÃÂ£37.1million signing was delighted to be back in the first team.

"From a personal point of view, I have to say that I felt really good on the pitch and I enjoyed (starting) again from the beginning with my team-mates, trying to be helpful in all aspects of the game," Mata said.

Daley Blind, who also had a good game at left-back, believes Manchester United's emphatic victory over Tottenham will kick-start their season.

"In the last few weeks and months, we have been improving and I think we've played good halves before, but on Sunday we were really aggressive for almost 90 minutes

And that's a step [forward] for this team.

I think this was the start of something nice."

Rather than worry about whether they will finish inside the top four, there is genuine optimism among the squad and the staff about United's chances of climbing the table and even finishing second.

"You're always looking up but the important thing is to watch yourselves, play your own games and try to get three points every game," Blind added.

"They're all finals now and we have to realise that.