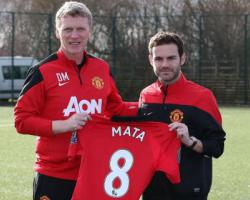 Mata was unveiled by United on Monday and just over 24 hours later will make his debut in the Premier League encounter with Cardiff at Old Trafford.

Now 14 points behind leaders Arsenal, the defence of their title seems to be over.

But, fresh from his club-record ?37.1million switch from Chelsea, Mata refused to write off the Red Devils' hopes of retaining their crown.

"If another club was in this position it would be very difficult for them to come back and take first in the league," said the Spain midfielder.

"This club can do it. This club is used to fighting to the end.

"This is the real image I have of Manchester United; always trying to win every title and always coming back from difficult moments."

Mata's arrival has coincided with the return to fitness of Wayne Rooney, Robin van Persie and Marouane Fellaini, which gives United a far stronger look than has been evident over the past few weeks.

Mata is particularly looking to link up with Rooney, who is talking to the club over a very lucrative contract extension.

"He is one of the best players in the history of this country," said Mata.

"He is unbelievable. He is a striker who can score, can assist and can come to the midfield to take the ball and move.

"I will enjoy playing alongside him."

After taking time to assess the squad left behind by Sir Alex Ferguson, Moyes has confirmed his rebuilding plans have only just begun.

Anderson has already joined Fiorentina on loan, while Wilfried Zaha and defender Fabio will spend the rest of the season at Cardiff.

Moyes scoffed at suggestions star youngster Adnan Januzaj might be tempted by interest from Paris Saint-Germain, "you have been reading too much speculation", said the Scot.

But a clear-out is certainly under way, with Rio Ferdinand, Nemanja Vidic, Patrice Evra, Javier Hernandez, Alexander Buttner, Nani and Ashley Young all sweating on their futures.

For Moyes is not willing to preside over this season's failings much longer.

"I am not going to accept it," said Moyes.

"I, ultimately, take the wrap for that.

"But what I will do is make it right. I am going to get better players in.

"Unfortunately, I don't think there will be more in January. But it will change."