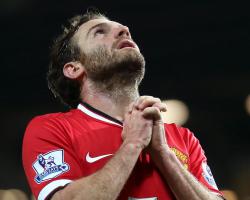 United slipped to fourth in the Barclays Premier League on Sunday thanks to a 1-0 home defeat to Southampton.

Despite fielding an attacking quartet worth over ÃÂ£150million, United failed to register a single shot on target against Southampton, who moved up to third.

Mata missed three good chances to rescue United after Dusan Tadic's 69th-minute strike and he admitted in his weekly blog that the defeat was tough to take.

"It's not easy for me to write here today, right after this Sunday's defeat," the United midfielder wrote after the 1-0 defeat.

"It was not the best game to watch

They were well positioned and defended very well, so creating chances was difficult

And yet we were in control of the game.

"The first half was not very good; the game was quite slow, too tactical

But we kept the ball most of the time, trying to find spaces towards the goal.

"They scored after the break in one of the few chances they had, after a ball that rebounded on the post, and then we tried everything to tie the game

I think we deserved that goal

I don't think we deserved to lose."

United fans became accustomed to seeing Mata write about bouncing back from defeat towards the end of last season when David Moyes' reign began to crumble.

There was a sense of deja vu therefore when he published his latest entry on Monday morning.

"We are disappointed because of the defeat, but you can rest assured that the team will keep fighting in every game until the end to achieve our goals," the former Chelsea man said.

"What matters now is to win our next game, regardless of who scores.

"We visit QPR and it's going to be a tough one

They are in need of points and we know we must go back to a good streak of wins."

United manager Louis van Gaal was angry when it was pointed out to him on Sunday that after 21 matches he had accumulated the same number of points as Moyes, who was sacked after 10 months.

Unlike Moyes, the Dutchman has spent vastly on new players this season, parting with over ÃÂ£150million to bring in seven new faces

One of them, Daley Blind, echoed Mata's calls for an instant response when United head to QPR on Saturday.

"We have to bounce back, we have to stand up as a team with each other and do the best we can in training, every day, and have a good week because we need a win next weekend," said the ÃÂ£14million signing from Ajax.

United, meanwhile, have confirmed backup goalkeeper Sam Johnstone will spend the rest of the season on loan at hometown club Preston.

Johnstone was on loan at Doncaster, but the 21-year-old cut short his spell at the Yorkshire club to move to Deepdale, where his father Glenn played during the 1990s.