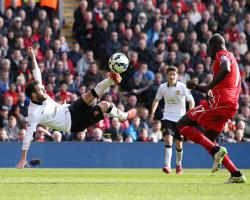 United strengthened their top-four hopes with a 2-1 victory that came courtesy of Mata's stunning brace.

United are now five points clear of the Reds with just eight matches to go.

But Mata is aware United still have to play Manchester City, Chelsea and Arsenal before the end of the season, so he is not getting too carried away.

"Beating Liverpool at Anfield, being lucky to score two nice goals and feeling (the fans') gratitude is something I will never forget

But we must be cautious: these are just three points in the race to our goal," the United playmaker wrote on his weekly blog.

Talk of disappointment and the need to bounce back have been commonplace in Mata's blog since he moved to United from Chelsea just over a year ago.

The Spaniard was part of the final months of David Moyes' failed reign and he has also played in some underwhelming performances under the Scot's successor Louis van Gaal.

The Dutchman has also been reluctant at times to pick Mata

There is little wonder, therefore, that the ÃÂ£37.1million signing regards the win at Anfield as among the best of his career.

"This Sunday has been one of the happiest days of my career," Mata said.

"When you start playing football as a kid on muddy pitches, for something so simple and wonderful as having fun, you dream about becoming a footballer one day to be in a game like the one in Anfield.

"Manchester United and Liverpool have one of the biggest sports rivalries, and this is the biggest game in English football.

"Besides, the game was also important because both teams were close on the table, fighting for a place in the Champions League next season.

"It has been an unforgettable day for me."

Mata calmly slotted the ball past Simon Mignolet to hand United an early lead and he gave his team a two-goal cushion with a wonder goal just after Steven Gerrard's senseless dismissal.

The former Valencia midfielder leapt into the air and smashed an acrobatic volley into the Liverpool net after a delicate chip from Angel di Maria.

Mata says instinct took over when he saw Di Maria's pass float over the Liverpool defenders.

"Many of you are asking me about the second goal and the truth is I don't know very well how to explain it," Mata said.

"It's something you just don't think..

It's more a resource you use when you understand it's better to shoot the ball as it comes rather than trying to control it and keep the play.

"Angel's pass invited to do so

It's one of the best goals of my career for sure, among other things because it happened in such a massive game

And it helped us win."

Michael Carrick was delighted to see his team-mate prove his critics wrong.

"He has always been a great player," Carrick said.

"I think he has always been important to us because he brings so much to the team and so much ability.

"He is just so clever

He moves the ball, takes up good positions, he is dangerous and he is just so intelligent.

Mata was left out of the United starting line-up on just two occasions last season following his January move from Stamford Bridge, but he has seen less first-team action this year thanks to the arrival of Di Maria and Ander Herrera.

Carrick feels Mata has been a victim of the fact that Van Gaal has a vast pool of players to choose from.

He believes the fact that there is so much competition for places can only benefit the club.

"Competition is what you get at big clubs," the England midfielder said.

"I have always had it and it keeps you on your toes.

"We see in training when we have games that both teams are pretty equal, when we have 11 v 11, because that is the strength of our squad now

A lot of players have had game time this year and that does bring options."