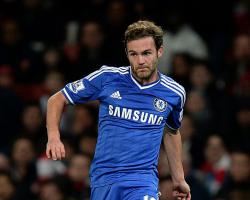 Although it was widely assumed the Chelsea midfielder would head north for a medical on Thursday, Mata was forced to wait for the final details to be thrashed out between the clubs.

United officials remained relaxed about the situation, giving no indication there had been any last-minute hitch that could delay the move.

And, although some Manchester City fans have suggested Mata aborted his journey in the wake of United's shattering Capital One Cup semi-final exit to Sunderland, it is widely assumed the formalities will be concluded within the next 24 hours.

That would allow the 25-year-old to train with his new team-mates over the weekend, before being presented to the media next week, possibly ahead of what seems certain to be his debut against Cardiff at Old Trafford on January 28.

Ineligible for the remainder of United's Champions League campaign, Mata is tasked with trying to help his new club secure a top-four spot, having dropped six points adrift of Liverpool.

Yet, whilst hopes of retaining their Premier League title have all but disappeared, United could have a significant say in who does win it.

And it has not escaped Arsene Wenger's attention that Mata will strengthen a United side that may have already faced Chelsea twice, but still have matches against Arsenal and Manchester City to play.

"It opens up again questions about the dates of this transfer window," said Wenger.

"Some teams have already played twice against one opponent and some others not.

"If you want to respect the fairness for everybody that should not happen.

"I can understand completely what Chelsea are doing. They could have sold him last week.

"They do not make the rules, but maybe the rules should be adapted a bit more for more fairness."

None of this will concern United, who have endured such a poor campaign.

Arguably their latest setback was the lowest point of all, given they found themselves outplayed at home by the team currently 19th in the Premier League, gifted Sunderland a last-minute goal that deprived them of a place in the final and then, after salvaging the situation through Javier Hernandez deep in stoppage time, conspired to convert just one of five kicks in what must go down as one of the worst penalty shoot-outs of all time.

It has led to Moyes being savaged by some fans, who bombarded radio phone-ins to express their concerns.

Others have been more measured in their assessment, acknowledging the squad left by Sir Alex Ferguson was flattered in the extreme by a 20th championship, achieved by a massive 11 points.

It has created a situation where everyone, inside Old Trafford and out, accepts requires a major injection of morale, which former defender Gary Pallister insists Mata will provide.

"He is a fantastic signing," said Pallister, who was speaking at the National Football Museum, where he helped launch an exhibition dedicated to the 125th anniversary of the Northern League.

"He has great skill, great imagination, flair and goalscoring ability.

"A lot of people can't quite understand why he has not been in Jose Mourinho's team after being player of the year for the last two seasons.

"He is the kind of player Manchester United fans want to see. He has great imagination and can get people off their seats in anticipation of the things he can do with a football.

"We are delighted to get hold of him. Hopefully he can help lift Manchester United out of the spell they are going through."

As a teenager, Pallister spent 18 months in the Northern League with Billingham Town before moving on to Middlesbrough, where he caught the eye of Ferguson.

He was part of the side that flirted with relegation in 1990 before eventually pulling clear of trouble and then winning the FA Cup, the start of almost a quarter of a century of unprecedented success with United.

"That side was close to getting into a relegation scrap," said Pallister, who won four Premier League titles and three FA Cups during his nine-year stint at Old Trafford.

"We very nearly went into the relegation zone.

"People have to remember it is very difficult to join a club the size of Manchester United. Even walking into the stadium as a supporter for the first time takes your breath away.

"This is a work in progress - and everybody has to get behind the manager and staff."