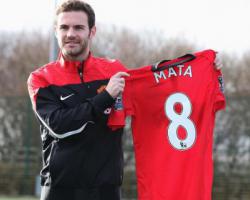 The Spain international has moved to Old Trafford from Chelsea for 37.1 million pound.

The 25-year-old should provide the creativity and invention which has been sadly lacking from David Moyes' team this season, and he can not wait to play alongside Rooney.

"For me he is one of the best players in the history of this country," Mata said at his unveiling.

"He is unbelievable, he can score and he can assist.

"I will try to connect with him as much as I can. I will try to find the gaps in rival defences, try to be in the positions I have to be in to assist the strikers."

Asked about the pressure that comes with his price tag, Mata said: "I like the pressure, I think it's good for a footballer to try to improve.

"People are expecting big things from me and I am looking forward to it."

Mata, who will wear the number eight shirt, said he was attracted by the character of United and their reputation for never giving up, even claiming they were not out of the Barclays Premier League title race.

"What I like the most about this club is the character. I think if another club were in this position in the league, I think it would be very difficult to come back and take first position, but this club can do it.

"This is the real image I have from Man United, always fighting to win titles, always coming back from difficult moments.

"The team is really good, the squad is really good. This season they have had some unlucky moments they didn't deserve. Hopefully from now until the end of the season we will win as many games as we can."

Mata revealed the move was "really important" to his hopes of making Spain's squad for the World Cup, and said he was "really happy" to be at United.

"I just wanted to go to a place where I would feel happy," he added.

Asked about what position he would prefer to play in, Mata diplomatically responded: "I think that's a question for him (Moyes). I would like to play anywhere."