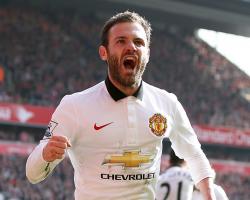 The 26-year-old has not featured for La Roja since a 3-0 triumph over Australia in Spain's final group game at last year's World Cup in Brazil.

Mata, who has scored 10 goals in 34 appearances since making his Spain debut six years ago, wrote on his blog: "Many of you are asking me these days about the Spanish national team.

"As I always say, I have been very lucky to play and to win a World Cup and a European Championship, to participate in the most important competitions, but I'm still excited as the first day.

"I am convinced that I'm in a perfect age in my football career and I look forward to keep contributing and achieving more success with my national team.

"That's what I work for every day, training and playing to the maximum, trying to do the best I can.

"After that, obviously, the manager is the one who picks the players for every game.

"So now I take these quiet days to keep working, as I said, but I also switch off and rest a bit."

Mata, who was voted as United's player of the month for March by the club supporters, is looking forward to making an impact during the remainder of the campaign.

"I want to thank our fans for the Player of the Month award for March," he said

"It's been a month with several key victories and a boost of confidence for the team.

"As I always say, your support is vital for us!

"We are in the last stage of the Premiership, with just eight weeks ahead: eight crucial games to determine where we will finally stand on the table."

Mata has scored seven goals in 25 Barclays Premier League appearances this season to help United remain on course for a top-four finish and qualification for next season's Champions League competition.

"Personally, I think setting our goals game after game is the right thing to do," the former Chelsea player said

"I check the calendar and I see four big games for us in April: Aston Villa, Manchester City, Chelsea and Everton.

"All of them are big clubs and we want to show that we can beat them, getting close to our goal and also making our fans happy."