Mata - We need to start winning 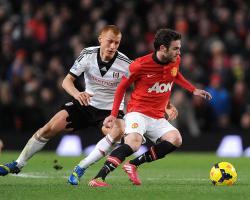 United's latest sub-par display came on Sunday when they drew 2-2 at home to Fulham thanks to Darren Bent's stoppage-time header.

United flung a record number of crosses into the box after Steve Sidwell put Fulham ahead but, despite goals from Robin van Persie and Michael Carrick, the hosts could only gain a point against the Premier League's bottom side.

That result left Moyes' team some nine points off the Champions League places and, with only 13 matches remaining, Mata knows United are running out of time to qualify for the premier European competition.

"It seems that luck is not on our side, but I don't like to give excuses," United's record signing wrote on his blog.

"We have to get better and improve our shooting accuracy, because we got many times to the box and could have scored more than two goals.

"I'm sure we will make it, but there are less and less games to play so the sooner the better..."

Mata said he was "hurt" and "frustrated" by the Fulham draw - a sentiment shared by the fans who booed the team off at Old Trafford.

The United squad also feel the pain being suffered by the supporters, Mata insists, and he is determined to right the wrongs of the Fulham game against Arsenal on Wednesday night.

The good news for Moyes is that Mata has scored four times in his four starts against the Gunners for Chelsea, with his latest strike coming earlier this season in the Capital One Cup.

"The week at the training ground was really good

I know my team mates better and I feel a great atmosphere in the dressing room," Mata said.

"I hope we can show that next Wednesday against Arsenal

It's a very tough game, but I have good memories from my last visit to the Emirates a few months ago and I hope I can enjoy a good game as well."

Anything but victory at Arsenal will lead to more of the criticism that emerged after the draw against Fulham.

Cottagers centre-back Dan Burn said playing against United was reminiscent of his time at non-league Darlington.

Mata insists United must not dwell on the Fulham performance, though.

"The way to carry on is to stick together, the team and the fans, learn from mistakes and be positive, and we will show the character this team has always had," the Spain international said.

"I was frustrated after the match, but we will give everything until the end of the season, because that's what (the fans) deserve.

"The results may be better or worse but I'm going to give everything I have to help the team in every game, trying to enjoy football as I've always done, in the good and the bad moments.

"There is something we can always count on: the team's passion and sacrifice.

"We did fight until the end, and that's what I felt on the pitch, but once again we can't give excuses."