Morgan- Moyes will struggle with squad 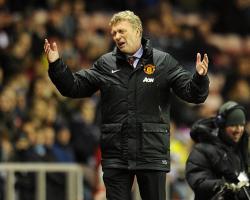 Morgan's preferred choice to get the job Ferguson vacated in the summer was Jose Mourinho, someone he feels was ideally suited to the pressure cooker environment at Old Trafford.

Instead, Ferguson nominated Moyes, who is now wrestling with the wreckage of a campaign on the brink of meltdown after three successive defeats to start 2014, plus the unwanted controversy surrounding Chris Smalling and his questionable attire at a fancy dress party.

Seventh in the Premier League, Moyes faces a battle to salvage a Champions League spot, while United will need to overcome a first-leg deficit when they play Sunderland in the Capital One Cup semi-final on January 22.

"I don't think Moyes was the right man," said Morgan.

"He has bought Marouane Fellaini for Â£27.5million and given Nani a new five-year contract when they have been trying to sell him for ages.

"On Moyes, I rest my case. What credentials did he have to take over the biggest club in the world?

"But I have nothing against him. I hope he is successful. But I just don't see it. Not with the players he has got.

"United might have won the league by 11 points last year but Moyes inherited the weakest squad we have had for a long, long time.

"If Robin van Persie had not been in the team last year, they would have finished halfway up the league.

"He was the difference and now Van Persie is injured."

The damning words will be cold comfort for Moyes, even though United have continued to insist he is under no internal pressure.

For Morgan, though, it is a worrying reminder of his own time at the club.

Much like Van Persie, when he arrived from Burnley in 1968, United were part of the elite, having just been crowned European Cup winners for the first time.

Within six years, they had been relegated, with Wilf McGuinness and Frank O'Farrell both proving incapable of filling the void created by Sir Matt Busby's exit, who briefly came out of retirement to try and halt the slide.

"I joined a great team but after Matt retired, it broke up very quickly," said Morgan.

"The players Wilf McGuinness brought in were nice lads but talent wise, they were dreadful.

"The problem is once you get into that cycle it is very difficult to get out of it.

"We said when Moyes was appointed it was the beginning of the end and, sadly, I fear they will struggle for the next few years now."

Morgan had little time for McGuiness, as he recounts in his recently-released autobiography 'On The Wing'.

The book chronicles his early career at Burnley, which made him one of the most sought-after players of his generation, his friendship with George Best and his regret that Tommy Docherty "a good manager but not a nice man" quit the Scotland job to become United boss, a move Morgan felt cost his country at the 1974 World Cup while ultimately ending his time at United.

"I do feel I wasted myself at Manchester United," said Morgan, who still lives in the area.

"They were hard years. But I never thought about baling out.

"I loved Manchester United. I loved the supporters. They were unbelievable, even when we were struggling. They are still the same now.

"I would have done anything for them."