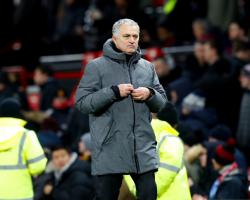 However, rival boss Pep Guardiola remains convinced his City stars have nothing to say sorry about

Guardiola offered an apology but his aim was to appease rather than accept any fault, as both clubs prepared incident reports which must be sent to the Football Association by 6pm on Wednesday

Victory sparked mass celebrations from City, and United are understood to have taken exception to how their visitors conducted themselves in and around the dressing room area.

Milk and water are claimed to have been thrown at Mourinho after a reported confrontation with City goalkeeper Ederson, leading to an altercation involving up to 20 players and staff in a crowded corridor.

Mourinho said: "The only thing I can say is that for me it was just a question of diversity - diversity in behaviours, diversity in education

Just that and nothing more than that.

"The diversity of behaviour, of opinion, of education."

He added: "You know, what we did in the Arsenal stadium (after winning 3-1 their earlier this month) it was completely diverse

"What we did, what happened after that match, the way we behaved as winners..

When asked about possible FA punishment, Mourinho said: "May punish who? Why?"

Mourinho gave short shrift to another reporter bringing up claims that Romelu Lukaku had thrown a bottle in the skirmish, and said: " Show evidence and punish him."

When that was followed up with a question about whether he was confident his players behaved appropriately after the game, Mourinho said: "I know

I am not confident, I know."

City coach Mikel Arteta is understood to have suffered a cut to the face in the skirmish and Guardiola would not confirm any details of the alleged melee.

The Spaniard was adamant his players were well within their rights to try to enjoy their victory in their dressing room, but said he would be prepared to apologise if United considered the celebrations excessive.

"Sometimes Manchester United made a lot, in the past, celebrations over City

It is part of everything," Guardiola said ahead of Wednesday's trip to Swansea.

"But if we were not correct, or something like that, then I apologise to all of Manchester United

Our intentions were not that.

"Our intentions were to celebrate, inside the locker room, our happiness because we were happy

If the people cannot understand that then I'm sorry.

"We were so happy, we won a derby

If in that way we offended United - not just one player, not (just) Jose - then I apologise

We have huge respect for our opponents - not just Manchester United, all the opponents."