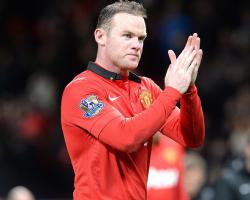 However Mourinho is ruling out the prospect of Rooney coming to Stamford Bridge after claiming United have vowed they will not do business with Premier League rivals.

Mourinho attempted to lure Rooney to Stamford Bridge last summer and it has already been suggested he will return with another offer if United fail to qualify for next season's Champions League.

United are keen to open negotiations with the 28-year-old, whose present deal expires in 2015.

Yet Mourinho suspects Rooney could be heading abroad if United cannot persuade him to commit to new terms.

Speaking ahead of Sunday's Barclays Premier League match between his team and United, Mourinho told national newspapers: "Man United made it clear in the summer they don't swap or sell players to their direct rivals.

"They were clear in the way they approached the Rooney situation. For them, it's pretty clear. They don't swap. They don't sell.

"I think maybe this summer they will try to sell to a non-direct rival. But they were very clear."

United manager David Moyes does not feel the Chelsea manager is correct in his assessment that Rooney could be on his way to an overseas club, but he refused to resort to similar tactics regarding Mourinho's players, including the unsettled Juan Mata.

"I don't talk about players at other clubs. It's not my style," the Scot said.

"Only time will tell and give you the answer (about Rooney). I completely disagree. I can only tell you I disagree.

"The club do the right things, there is no doubt about that. We'll make sure we do the things we need to do."

Rooney is approaching the 10th anniversary of his move to United. He joined from Everton in August 2004 and is the fourth highest goalscorer in United's history.

A groin injury means he will be absent from the line-up for Sunday's match at Stamford Bridge.

Moyes, who succeeded Sir Alex Ferguson last summer, has revealed he received an apology from Chelsea over comments Mourinho made about the Red Devils.

Stories appeared this week in which Mourinho indicated he had been made aware by someone within the United camp that all was not well at Old Trafford.

Speaking in the Evening Standard, the Portuguese had said: "My feeling, which is based on years of communicating with Sir Alex and some inside information, is Man United are not happy."

But ahead of his side's clash against Chelsea at Stamford Bridge on Sunday, Moyes stated the Blues have apologised.

"I've seen it and had an apology from him and his department," Moyes said.