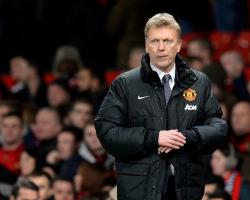 United head to Arsenal on Wednesday reeling from the loss of two more points against bottom club Fulham at Old Trafford at the weekend.

The result continued a pitiful start to 2014, which has seen United win just three times

One of those wins, in the second leg of the Capital One Cup semi-final against Sunderland, effectively became a defeat anyway as the Red Devils crashed out on penalties.

Little wonder every bit of evidence is being seized on to explain how a team should crumble so quickly after they won the title by 11 points last term.

Manager Moyes can point to extreme instances of bad luck; David de Gea's last-minute fumble against Sunderland that cost his team a place at Wembley, or Darren Bent's injury-time equaliser at the weekend for a Fulham side who did not seem to be so bothered about scoring.

Ultimately though, the Scot acknowledges the fault lies within his dressing room.

"Winning changes it - and we have not won often enough," said Moyes, who succeeded Sir Alex Ferguson last summer.

Anybody who watched the game the other day and didn't think we deserved to win by a hundred miles knows nothing about it.

But we are not looking for excuses.

"We can only blame ourselves and we need to do better."

It is true anything that can go wrong for Moyes is doing so at present.

Both Phil Jones and Marouane Fellaini are set to miss Wednesday's trip to Arsenal after being struck down by injuries that came immediately after they had recovered from different physical problems.

Robin van Persie and Wayne Rooney are still trying to find their best form after a spell on the sidelines, while both the defensive and midfield areas are operating below their best as United struggle for confidence.

Yet Moyes retains belief in his squad, for whom record signing Juan Mata has also failed to sparkle on a consistent basis.

"We have a great group of players here," said Moyes

"They have shown it previously

They are hurting as well

They want to improve it."

Moyes realises further additions need to be made.

Nemanja Vidic is unlikely to be on his own in leaving Old Trafford this summer, with Rio Ferdinand, Patrice Evra and Javier Hernandez among those for whom time is surely running out on their United careers.

However, Moyes does understand that until his team halt their present disastrous run, the negative angle will be found to accompany all his work.

"A lot of people are looking at the Fulham game and saying we crossed it too much," said Moyes.

"If we hadn't crossed it they would be saying we should have crossed it more.

We need the fortune to change."

A visit to Arsenal is certainly one.

United have already claimed the Gunners' scalp once this season, when Van Persie scored the only goal against his old club.

What Moyes would give for a repeat of that single-goal success against a side with problems of their own after the 5-1 hammering they took at Liverpool at the weekend.

Not that Moyes views the teams' respective problems as taking on any greater significance.

"It doesn't need anything adding to the occasion," he said.

"Arsenal against Manchester United has always been a big game

You only have to look back through the seasons to see how important these games have been.

"It is an important game for both teams."

Arsenal boss Arsene Wenger maintains Arsenal can bounce back from their "accident" at Liverpool by beating Manchester United on Wednesday evening.

The Gunners were blitzed 5-1 at Anfield on Saturday - when they trailed 4-0 after just 20 minutes - and where later knocked off the top of the Barclays Premier League table by Chelsea, although Manchester City dropped points in a goalless draw at Norwich.

Wenger accepts his side did not produce the required performance of championship challengers, but is confident of a response against an inconsistent United side at the Emirates Stadium.

"It is always a disappointment to lose a game, but I think it was an accident because we have been very stable defensively and we have to treat it like that," said Wenger.

"We have just been on a 10-game unbeaten run

You cannot consider one game as the trend, the pattern of our season.

"It is an accident, not a welcome [one] of course, a very disappointing one, but a successful season is decided by how you respond to that.

"In any season you have disappointments, it is always down to the team to respond in a very positive way, that decides the success of the team."

Liverpool head back to north London for an FA Cup fifth-round tie on Saturday ahead of the visit of Bayern Munich in the Champions League on February 19.

Wenger intends to focus on the positives.

"We tend always to forget how good we are when we are not successful," he said.

"It is important that we remind them we have done until now very well, that we are in front of a very important week for us and we have worked very hard until now to be in that position."

Wenger, though, has no issues with the contribution of the ?42.5million German playmaker.

"He didn't have the best of games on Saturday, but that can happen

He works very hard to adapt to the physical level of the Premier League and for me he is an exceptional player," said Wenger, who should have France under-21 forward Yaya Sanogo available against Manchester United following five months out with a back problem.

"I wouldn't like to put too much pressure on him because he has been a top-class player until now.

"He knows when he is not good enough he will get questioned - that is normal."

Arsenal are asking fans to allow extra time for their journey to the stadium during the proposed industrial action by London Underground staff on Wednesday.

Wenger said: "The game will go on, that is for sure.

"We are sorry for our fans about the tube strike because many people will have to walk there, but we have improved the number of stewards and the safety and security of our fans should be guaranteed.

"Unfortunately it is not the best conditions to go into a game like that."