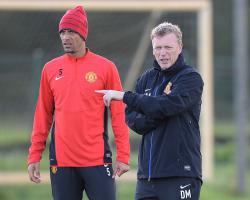 It had been claimed Ferdinand, an unused substitute in Sunday's Premier League draw with Fulham at Old Trafford, would miss the short warm weather training camp.

In addition, it was suggested the club would confirm on Thursday that Ferdinand would be retiring at the end of the season.

However, Moyes said such claims were untrue.

"I can only tell you what was written was a load of rubbish," said Moyes.

Although Moyes did not say so directly, even when given the opportunity to clarify his comments later, it was subsequently confirmed by the club that Ferdinand would be going on their break.

Now 35, Ferdinand's present contract is due to expire at the end of the season.

The veteran defender has played just once in two months

He failed to make an appearance at Old Trafford on Sunday even though two obvious alternatives, Phil Jones and Jonny Evans, were ruled out through injury.

Ferdinand's long-time defensive partner Nemanja Vidic has already announced his intention to quit Old Trafford in the summer, so it would not be a massive surprise if Ferdinand did call it a day.

He certainly would appear to have little future at United, the club he joined for ?29.1million in 2002, although a switch to Major League Soccer is not completely out of the question.

Ferdinand has also entered the debate.

In addition to a putdown of the author of the story about him not going on the Dubai trip, he stated on Twitter: "Must be another slow news day."