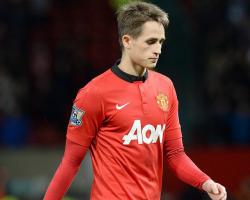 The 18-year-old received his third yellow card of the season for simulation on New Year's Day, when he went down under Danny Rose's challenge on the edge of the area during the latter stages of Manchester United's 2-1 defeat by Tottenham at Old Trafford.

Januzaj now has the unwelcome tag of being the second worst offender for diving in Premier League history, behind only Gareth Bale and the worry must be he is developing a reputation that will eventually go against him.

Moyes has never been scared to confront the diving scourge, and previously this season declared an intention to speak to Januzaj in an effort to stamp it out of his game.

However, in this instance, the United boss feels his duty is to stand up for Januzaj as he remains convinced referee Howard Webb made a mistake.

"I am always the first one to come out and say I won't have players diving and I will deal with it," said Moyes, ahead of Sunday's FA Cup tie with Swansea.

"In the same breath, I am going to protect them when I think it is wrong. I thought it was wrong the other night."

Moyes hopes the diving stigma will not attach itself to Januzaj due to his immense talent.

It could be argued both Bale and former Manchester United star Cristiano Ronaldo escaped extreme negative publicity because of their ability to get a crowd on the edge of their seats.

And, whilst Januzaj evidently has much development ahead of him, his manager feels there are similarities.

"Adnan is such a talented footballer," said Moyes.

"I have no doubt he will go on to be one of the best players to be playing in this country for a long time, and probably even at Manchester United.

"I remember when (Cristiano) Ronaldo came over, a lot of people said the same thing about him.

"Not for a minute would I even try and compare him to Ronaldo because of how good he is. But the boy is only 18. He will get better. He will learn. He will understand the game more.

"What he is doing at the moment is making a contribution in games as a footballer."

Januzaj only has to look at Ashley Young for an example of how divers can find themselves being wronged.

Whilst it would be unfair to say officials take an especially hard line with those who have transgressed in the past, common sense would dictate they err on the side of caution.

That would seem to be the only plausible reason why Webb did not award a penalty for Hugo Lloris' high tackle on Young at Old Trafford in midweek, a challenge so severe the in-form England winger faces a spell on the sidelines with a shoulder injury sustained as he fell.

"The level of the tackle meant Ashley has fallen on his shoulder and damaged it," said Moyes.

"We're not sure exactly how long he's going to be out yet.

"I don't think I need to repeat myself. We didn't get a penalty kick decision which I found quite incredible - and still do."

With a Capital One Cup semi-final at Sunderland looming just 48 hours after Sunday's game, which Moyes was staggered to learn will be preceded by the fourth-round draw some two-and-a-half hours before kick-off, the United boss has pledged to rotate his squad.

Wayne Rooney could be amongst those to be rested at the weekend as he continues to nurse a groin problem, although Moyes' room for manoeuvre is limited by Robin van Persie's ongoing absence with a thigh complaint which currently extends to six matches.

"Robin's coming on but we'll let you know when he's ready," said Moyes.

It does seem somewhat bizarre both United and Sunderland have been given just 48 hours to prepare for their encounter at the Stadium of Light.

Tellingly, Moyes avoided a direct answer to whether he felt the fixture schedule was fair.

"They (game's authorities) would see it as being fair," he said.

"Two teams play on Sunday and the same two play on Tuesday.

"To their eyes, that is them being fair."