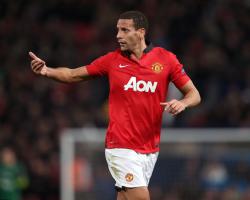 The 35-year-old has made just 13 appearances this term, and only two since November, as he struggles with a knee injury and increased competition for places in the centre of the champions' defence.

Ferdinand's contract is set to expire in the summer but, with Jonny Evans and Phil Jones both having to be withdrawn during the 2-1 defeat to Stoke at the weekend, Moyes has no qualms with turning to the former England international.

"Rio is back training

He's back and we will continue to use Rio at the right times and the right moments," he told several national newspapers.

"Rio has made a great contribution, especially in the first half of the season

He was a big part in helping me to settle.

"He has competition at centre-half but he is very much valued and looked at as one of the senior players."

Ferdinand could return to action against Fulham at the weekend when fellow central defender Nemanja Vidic will also be available after serving a three-game suspension.