Moyes looks to past for United inspiration 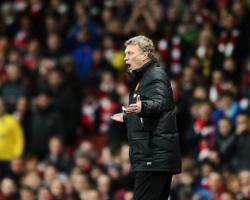 United were held to a 0-0 draw at Arsenal on Tuesday and their disappointment was compounded by the news that Champions League qualification rivals Liverpool and Tottenham Hotspur had both won.

Steven Gerrard's stoppage-time penalty gave fourth-place Liverpool a 3-2 success at Fulham that took them 11 points above United, while Spurs are eight points clear of the champions after a 4-0 win at Newcastle United.

United have only 12 games in which to reverse the situation if they are to avoid missing out on a place in Europe's premier club tournament for the first time since 1995, but Moyes refuses to give up the fight.

"All I can do -- I keep saying it -- but I'll try and win the next game and see if we can pick it up," he told journalists at the Emirates Stadium.

"If there's one club in history who've been great at winning games in the second half of the season and putting pressure on the teams above, it's been Manchester United.

"We'll continue to try and do that and see if we can make it work."

Asked if United's multiple trophy-winners still had the requisite hunger, he replied: "I believe so.

"I see them, I think they're great lads, they're fantastic with their attitude, their training

Their commitment is first-class.

"You saw tonight (Wednesday), how good Vida (Nemanja Vidic) was, how good Rio (Ferdinand) was when he came on.

"They've all got medals, and when you've won, you want to win more

They're all still hungry and determined to be succesful."

Arsenal manager Arsene Wenger voiced support for Moyes and said that United's performance proved that they remain one of the country's leading sides.

"Man United is a good team who can play against anybody in our league," he said.

"At the moment they're not where they can be, but you cannot say with the players they have on the pitch that they are not quality."

When pushed on United's chances of finishing in the top four, however, Wenger would only say that it was "not mathematically impossible".

Arsenal had been humbled 5-1 at Liverpool in their previous outing and Wenger felt that the trauma of his side's experience at Anfield had had an inhibiting effect on their performance against United.

Wenger conceded that his players had been "nervous", but added: "It's not worrying because we care about what we do.

"When you concede five goals like we did on Sunday (Saturday), we're only human beings and that's always what you get.

"Sometimes you don't score, but the team was highly focused not to concede today."

Arsenal would have gone top with victory, but the draw left them only a point behind leaders Chelsea and Wenger said: "We've come out of two difficult games and we're still in a strong position.

"That's the only positive

We had two bad results, but we're still in a position where we can do it."

United striker Robin van Persie had two good chances to score against his former club, but he put an early shot straight at Wojciech Szczesny and was denied by a stunning save from the Arsenal goalkeeper late in the game.

Arsenal centre-back Laurent Koscielny saw a header cleared off the line in the second half and the hosts finished the match strongly, with United goalkeeper David de Gea saving twice from Santi Cazorla.

United lost Rafael da Silva at half-time after he landed awkwardly following an aerial collision with Olivier Giroud and Moyes revealed after the game that he had suffered concussion.

"Rafa had concussion," he said