Moyes- No more deals to be done 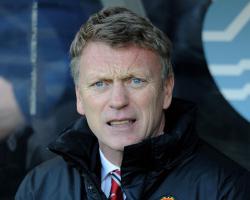 But, despite plenty of links to further additions, the Scot insisted there will be none.

"You can stand your cameras down," he said at his regular Friday press conference.

"I don't think they will be required

We have done our business."

However, there is likely to be some movement with younger players leaving on loan.

Wilfried Zaha has already joined Cardiff, while Larnell Cole and Ryan Tunnicliffe are in talks with Fulham.

In addition, Will Keane is being linked with QPR.

However, it is looking unlikely that Nani will be going anywhere, having previously attracted interest from Inter Milan.

"We have quite a few young players who will go on loan before the window closes," said Moyes.

"It's for their development - they are looking for a different quality of football.

"Reserve team football doesn't quite do that for them, so a lot of them will go out on loan, get experience and become better players for it."

The same is true of Zaha, even though the winger has two full England caps and Sir Alex Ferguson shelled out ?12million on the 21-year-old 12 months ago.

"I said right at the start of the season that if I could get him the games I'd keep him," said Moyes.

"If I couldn't, then I'd get him some games on loan.

"There were a few clubs who wanted him on loan but in the end we felt Cardiff was the right choice for him."

Meanwhile, Moyes hinted Saturday's trip to Stoke may come slightly too soon for midfielder Marouane Fellaini, who has almost completed his recovery from wrist surgery.

"Felli's on the fringes of things," he said

"We need to get him a bit of match practice but he's very close."

In addition, Robin van Persie and Wayne Rooney are still being managed delicately, despite making their comebacks from respective thigh and groin injuries in the win over Cardiff.

"We have to be careful with them both," said Moyes

"We are mindful they're both coming back from injuries and we have to make sure they're ready.

"We are a little bit more concerned about Robin because he's been out longer.

"We have to keep managing them and do things right

But I've got them back and it's great to have them."