Moyes not saying anything on Mata 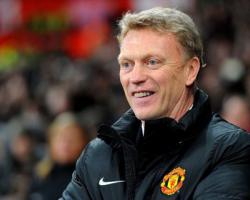 Mata is expected to undergo a medical tomorrow, with a source close to the club-record deal telling Press Association Sport on Wednesday that the transfer is "close" to being concluded.

However, Moyes opted not to speak about it following United's painful penalty shoot-out loss at Old Trafford.

Members of the media were informed before the post-match press conference that Moyes would be answering questions on the game only and when asked afterwards about Mata, the Scot said simply: "We are not saying anything."

Nevertheless, it would now be a major surprise if Mata was not part of Moyes' squad for United's next match, against Ole Gunnar Solskjaer's Cardiff at Old Trafford on January 28.

And on the evidence of yet another toothless performance from United, Mata's arrival cannot come quickly enough.

For, despite his team getting themselves to within a minute of booking a Wembley date with Manchester City on March 2, Moyes admitted United were below par.

Jonny Evans' first-half header would have been enough to send United through.

But David De Gea inexplicably allowed Phil Bardsley's weak slot to slip through his fingers in extra-time to hand Sunderland the initiative.

It was only the start of the drama though, as United immediately went down to the other end and scored again; Javier Hernandez turning home Adnan Januzaj's low cross.

That sent the tie to penalties, which turned out to be a miserable affair, with only Darren Fletcher converting for the hosts meaning when Rafael da Silva had his final effort saved by Vito Mannone, Sunderland's two successes, from Marcos Alonso and Ki Sung-yeung were enough to book a first final appearance since 1985 for the Wearsiders.

"If we were [to go through], we were going to stumble over the line.

"With a minute or so to go we were almost there. We had opportunities to score a second goal and put ourselves in a better position but there is always going to be a loser in the semi-final and it was us."

Asked whether it was the most severe blow he had taken during his short tenure, Moyes said: "Yeah, I think it is part and parcel of the game."

It was tempting to think Mata might have been a useful presence in the penalty shoot-out, with Danny Welbeck, Januzaj and Phil Jones joining Rafael in failing to convert.

Moyes revealed Michael Carrick would almost certainly have taken a kick had he not succumbed to an ankle injury, whilst Hernandez - who has taken penalties for United before - was also ruled out after hurting himself celebrating his goal.

"Ideally, it wouldn't have been the group we had chosen," said Moyes.

"Javier would have taken a penalty but was injured and people like Michael Carrick would have been involved."

The impending arrival of Mata should at least restore a feel-good factor, although, barring an unlikely Champions League triumph, Moyes' hopes of marking his debut season with meaningful silverware has now disappeared.