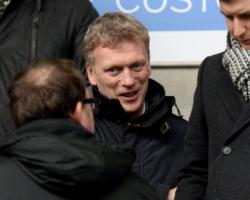 Spanish playmaker Mata is in line to make his United debut against the Welsh club after completing a club-record move from Chelsea worth ?37.1 million ($61.2 million, 44.8 million euros) at the weekend.

Mata is Moyes's second major signing, following the arrival of Marouane Fellaini from Everton for ?27.5 million last year, and the United manager believes that the Spaniard's arrival can set the tone for the months ahead.

"I want to build an exciting team," said Moyes, whose side are currently 14 points behind Premier League leaders Arsenal in seventh place.

"That's always the way I've wanted my football to be played and I've not known it any other way. I want to win and give the supporters something to shout about because I've not done that often enough.

"This is the first of many more to come in time. I'm looking forward to Juan being the start of it."

He had fallen out of favour with Blues manager Jose Mourinho and said that he had little hesitation in making the switch to United.

"This is a team that has won a lot of leagues in the history of the Premier League and English league," Mata said.

"It's amazing knowing that a club like Manchester United is interested in you. It's a good feeling.

"I know it is a big price, but I'm confident that everything is going to be OK. I will try my best, as I always have done.

"The squad and the manager are very good and the fans are unbelievable -- we have everything to be successful.

"Old Trafford is an unbelievable stadium to play football at. I have been there two or three times, but always with rivals, and now I have the chance to play there as my home.

"It's going to be different, but it will be great because I know how incredible the fans are there."

Cardiff's visit to Old Trafford will be a special moment for Ole Gunnar Solskjaer, the visiting manager.

The Norwegian spent 11 years as a Manchester United player and famously scored the winning goal in the 1999 Champions League final against Bayern Munich.

However, Cardiff's Icelandic midfielder Aron Gunnarsson says that Solskjaer will only be concerned about picking up points after seeing his slide slip to the foot of the league table.

"I am sure he will be looking forward to it, but his main focus is on getting the three points," Gunnarsson said.

"Manchester United are big in Iceland so I supported them as a kid and look forward to playing them.

"They are a great club. I've supported them since I was young, so it will be great to go and play there.

"That's what everybody wants to do. It is going to be a hard game as they are trying to lift themselves up, but we will look forward to it.

"We performed well against Manchester City (in a 4-2 defeat on January 18) and our performances are getting better, but we need a result."

United could welcome back strikers Wayne Rooney and Robin van Persie after injury, but Gunnarsson says the composition of the hosts' line-up will not affect the way that his side approach the game.

"We are in this position to test ourselves and play against the best players in the league," he said.

"It is going to be a hard game no matter who they play, but we are all looking forward to it."