Moyes- Rooney can be United legend 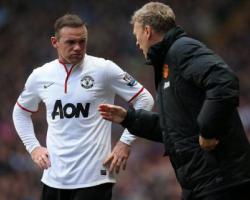 Rooney finally put an end to speculation regarding his future on Friday night when he signed a new contract that will keep him at Old Trafford until 2019.

Rooney is held in high regard by the United fans, but he still has a way to go to merit a place among the top echelon of club icons like Best, Charlton and Denis Law.

But with the prospect of another five-and-a-half years at the club, Rooney has a good opportunity to enhance his standing among the Old Trafford faithful.

"Wayne is a great but he's got a real chance to improve and be a legend," said United boss Moyes.

One obvious way Rooney can write his name into United's history is by beating Charlton's record of 249 goals for the club.

Rooney currently stands on 208 goals, but he knows he now has a good opportunity to become the most prolific striker in United's history.

"It's a great opportunity to try to break those kinds of records," Rooney told MUTV.

"I'm not too far away even though I've still got a few goals to go, but I'm confident I can reach it

Hopefully it will happen and if it does it will be a really proud moment."

A more immediate goal for Rooney is helping United qualify for the Champions League.

The Red Devils sit 11 points off the top four ahead of Saturday's trip to Crystal Palace.

Rooney could have left for guaranteed Champions League football this summer, but he wanted to stay because he is sure Moyes will eventually bring the glory days back to Old Trafford.

"I know the direction that this club is going in, and if we don't make it this season then we will come back stronger and claim a Champions League spot next season," Rooney said on his official website.

"The future is bright for Manchester United.

"This is still one of the world's leading clubs

We have seen this with the signing of Juan Mata in January.

"People have been saying that we may have trouble attracting the world's best players but I think the fact Mata came here shows this isn't true.

"This is a new era for the club, we have a new management team and a great new manager in David Moyes, there has to be some time for change.

We will continue to work hard and get Manchester United to the top where it belongs."

Moyes admitted it was "possible" Rooney could replace the departing Nemnaja Vidic as captain at the end of the season.

The club confirmed on Friday that Rooney has agreed to become an ambassador for the club when he retires.