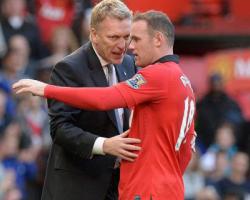 Rooney finally put an end to speculation regarding his future on Friday night when he signed a new contract that will keep him at Old Trafford until 2019, with Moyes backing him to earn his place alongside Sir Bobby Charlton and George Best in the club's folklore.

It is a scenario which barely seemed plausible when Moyes took charge of the club weeks after Sir Alex Ferguson appeared to have signalled the end of Rooney's United career.

But Moyes, who brought Rooney through as a teenager at Everton, revealed how two early meetings with the forward put him back on the road to his best form.

"I remember when he came to see me," Moyes said in several newspapers

"I thought he hadn't been the hard-working, aggressive player he was

But now in games people are saying: 'Look at the effort he is putting in.' It's his work-rate, not just for himself but for the team

He's become an all-round team player who is also a technically gifted footballer."

Ferguson claimed at the end of last season that Rooney had asked to leave, and he was linked with a move to Chelsea last summer.

However, Moyes never had any intention of selling.

"I said to Wayne that I wanted him to stay," he added

"Before I'd actually come in here, I'd met Wayne privately a couple of times, to talk about his situation, to try to understand

I needed to try to get him back to that level

"His training was first class, he came back in great shape, you could really see the hunger back in his eyes again."

With Rooney now signed up for the next five-and-a-half years, he can chase down Charlton's record of 249 goals for the club, needing 42 more to eclipse it.

"It's a great opportunity to try to break those kinds of records," Rooney told MUTV.

"I'm not too far away even though I've still got a few goals to go, but I'm confident I can reach it

Hopefully it will happen and if it does it will be a really proud moment."

A more immediate goal for Rooney is helping United qualify for the Champions League.

The Red Devils sit 11 points off the top four ahead of Saturday's trip to Crystal Palace.

Rooney could have left for guaranteed Champions League football this summer, but he wanted to stay because he is sure Moyes will eventually bring the glory days back to Old Trafford.

"I know the direction that this club is going in, and if we don't make it this season then we will come back stronger and claim a Champions League spot next season," Rooney said on his official website.

"The future is bright for Manchester United."