Moyes - RVP is happy at United 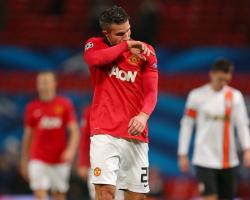 Along with strike partner Wayne Rooney, Van Persie will again be missing when United head to Chelsea on Sunday.

Not even a week's warm-weather training in Egypt has helped Rooney overcome a groin injury, while Van Persie will be sidelined for a 10th game with the thigh problem he sustained in the Champions League win over Shakhtar Donetsk last month.

Van Persie is due to return to training next week, though, which is welcome news for Moyes, as was the Dutchman's decision to speak up for his manager on Thursday when he insisted Moyes should be given time to get the job right.

Those words have helped dampen down talk that Van Persie does not get on with his boss, to the extent of gossip that he would not have signed for United had he known Sir Alex Ferguson was going to leave after a single season almost becoming accepted fact.

Moyes has never understood why.

"I keep saying it is untrue but for some reason people don't want to write it or hear it," he said.

"But it is the fact. Most people know that I talk pretty straight.

"If there was something wrong I would be the first one to come out and say it.

"I have a really good relationship with Robin, as I do with all the players.

"But when you are not winning, people look for reasons, and probably think I am not getting on with Robin.

"It couldn't be further from the truth."

After such a difficult period, the return of the back-to-back Golden Boot winner is eagerly awaited.

The same can also be said of Rooney, who is a little ahead of his team-mate in their respective battle for fitness, having at least managed to return to the training field this week.

Neither will be involved at Stamford Bridge, though, and given the Capital One Cup semi-final with Sunderland is looming on Wednesday, it could be the return to Old Trafford of new Cardiff manager Ole Gunnar Solskjaer on January 28 when either man is ready to start.

"Wayne has been away, as everybody is aware," said Moyes.

"He is looking quite good. He has done a lot of strengthening work around his groin but he won't be available for the game on Sunday.

"I don't want to say he'll be fit for whatever game and then find he's not, but hopefully we can get him back as quickly as we can because he is an important player.

"It will be a great boost for us all if we can get Robin back out on the grass because he is a player we've missed."

In their absence, Moyes will rely on the squad that triumphed over Swansea last weekend to end a run of three successive defeats for a game he knows could revitalise United's campaign, which included a drab first encounter between the sides at Old Trafford in August.

"That was a difficult game for both of us that probably came a bit too early in the season," said Moyes.

"We know this is going to be hard because Chelsea are very strong at home. As you would expect, they have made a strong start to the season.

"We are a little bit disappointed at not being in closer contention with the teams at the top but we are hoping between now and the end of the season we can do that.

"We want to hang in there and if we could win this game it would make people think we are not that far away."