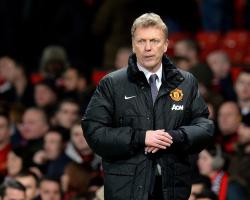 After a shaky start to Moyes' tenure, United have staggered through the early weeks of 2014, suffering five defeats already, before failing to beat bottom club Fulham at Old Trafford on Sunday.

It represents as poor a campaign as United have endured since the early years of Ferguson's reign, and they face another stiff test at Arsenal on Wednesday evening.

There has been general approval of former captain Roy Keane's assessment that up to half a dozen experienced players are required to rebuild United to their former strength, and it appears getting the club back on track is going to take time.

"I was given a six-year contract," said Moyes.

There has been rebuilding going on here year after year and we'll continue to do that."

There has been plenty of backing from the club's hierarchy, even though executive vice-chairman Ed Woodward is likely to be quizzed about this season's poor performances - and the impact failing to qualify for the Champions League would have on finances - when he speaks about United's second-quarter results on Wednesday.

This has not come as a shock to Moyes though.

"The support has been fantastic," he said.

The support doesn't surprise me."

Nevertheless, having already spent more than ?60million on Marouane Fellaini and new club-record signing Juan Mata, the Glazer family will have to splash out much more according to Keane.

For the Irishman agrees with many who feel Ferguson's managerial ability allowed United's controversial owners to get away with investing far less on the first-team squad than was actually required.

Keane told itv.com: "They've kind of cut corners in terms of transfers in the last few years, they've not gone out and got the big players, and it's just caught up with them this year.

"If it happens in the summer then instead of being fearful of it, embrace it - it's exciting.

"These can be exciting times for Man United

Get them back to the very top where they belong."

One man unlikely to be retained is Rio Ferdinand.

The 35-year-old's contract expires in the summer, and after making one appearance in two months there seems little likelihood of a further extension being offered.

He remains a United player for now though, which means he will be leaving for Dubai after Wednesday evening's encounter at the Emirates Stadium despite reports to the contrary.

"What was written was a load of rubbish," said Moyes