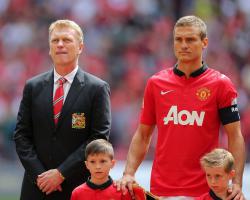 Vidic announced on Thursday night that he would be leaving the reigning Premier League champions after eight seasons at the club.

"It was something that we all mutually agreed together," the United boss said.

"I think it was the right decision for club and player."

Vidic has been heavily linked with a move to Inter Milan.

The Serb will skipper the Red Devils until the end of the season.

"He has been a brilliant servant for Manchester United," Moyes added.

"He is captain and it will remain that way until the end of the season.

"He has been a great player for us and we will continue using him."

Moyes confirmed that Jonny Evans will miss Sunday's home game against Fulham with a calf injury he suffered against Stoke.

Phil Jones, who came off with concussion against the Potters, could be fit, however.

Marouane Fellaini's bad luck with injuries continues as he has suffered a groin injury and will be out for a week, Moyes added.

This weekend will be the first time that Fulham manager Rene Meulensteen has come back to Old Trafford since leaving the United coaching staff in the summer.

Moyes opted to bring in a number of his own staff when he replaced Sir Alex Ferguson as manager.

The former Everton boss revealed he was sad to see the Dutch coach leave United, however.

"Rene helped me when I first came here," Moyes said.

"I had several conversations with him

He helped me, told me about the club, how it runs and the players.

"In the end I would have liked him to stay at the time but he wanted to go and that was fine.

"I am looking forward to getting Rene back and seeing him."