Moyes- we can build from here 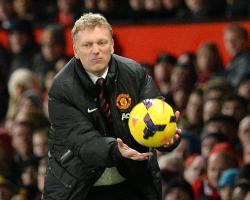 Second-half goals from Antonio Valencia and Danny Welbeck ensured the nightmare scenario of four successive defeats for the first time since 1961 did not materialise for the Old Trafford outfit.

Indeed, had Chris Smalling and Shinji Kagawa taken gilt-edged chances later in the game, they could have been looking back on a handsome triumph.

As it is, that depressing start to 2014 has been halted, even if Moyes accepts there is still plenty of work to do.

"From the start of the second half I thought we played very well," said Moyes.

"I hope it is going to improve an awful lot on that but you have to start somewhere and that was more like it.

"We scored two goals, should have had a few more and I can't remember Swansea having a chance hardly."

Although United started brightly, their failure to score led to them becoming anxious.

It took Moyes' half-time decision to switch Adnan Januzaj, who had started in a central position, with Kagawa, who began on the left, to change the course of the game.

Januzaj was outstanding and the 18-year-old provided the cross from which Valencia eventually scored after Kagawa's header had been saved.

And he was also involved in the move that ended with Welbeck flicking in his sixth goal in nine games.

"Adnan has been like that since day one," said Moyes.

"I speak to him a lot and he tells me he can play anywhere.

"He is not a nervous boy. He needs teaching and understanding because he is still learning the game but his natural talent and ability is up there with the best. In time he will prove that."

Moyes rejected stories that striker Robin van Persie could be sidelined for another six weeks as he struggles to overcome a thigh problem that has already kept him out for a month.

"I don't know where that has come from," said the Scot. "That would be wrong information as far as I am concerned."

And at the end of a tortuous few days, Moyes insisted he was handling the pressure with some degree of comfort.

"I sleep great every night," he said. "I am not nervous at all."

For Swansea boss Michael Laudrup it was another disappointing Premier League display.

On the same ground where his team won for the first time in their history in the FA Cup last weekend, they slumped to a defeat that means they have now collected just three points from their last seven games and are only one win above the relegation zone.

"Manchester United were very focused because of what had been said and written in the last days," he said.

"We expected them to come out from the first moment and want to get on top.

"I don't think that happened. We coped very well. What really hurt us - and we talked about it at half-time - was the first 20 minutes of the second half. We conceded after 90 seconds.

"But nothing has changed.

"It is true we have to improve the level of performance like another nine or 10 teams.

"We are still in the same position. I said before the competition started there are 11 or 12 teams [in a relegation battle].

"After the Tottenham game (on January 19) we have Fulham, West Ham, Cardiff and Stoke. They are the tie-break opponents for us.

"In those game we have to pick up points."

Laudrup also confirmed he would not be calling Ki Sung-Yueng back from his loan spell at Sunderland, even though the South Korean has been in excellent form recently and took his tally to three goals in eight games with his effort at Fulham on Saturday.

"There is a possiblilty to bring him back but I don't think it is a good idea," said the Dane.

"Ki feels comfortable where he is now. If we take him back, he would not play every game. Mentally, it would be very bad for him."