Neville and Giggs in Salford talks 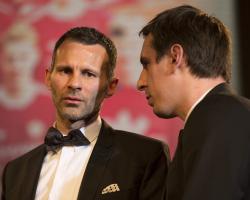 Giggs and Neville went on to win 38 major trophies between them after coming through the youth ranks at Manchester United, but both are now concerned about the dearth of young talent being produced at grassroots level.

The pair have therefore begun negotiations with Salford, who are based just a mile away from where Giggs and Neville used to train at United's old base known as The Cliff.

Salford are currently ninth in the Evo-Stik First Division North, which is four tiers below the Football League and one below FC United, who were formed by Manchester United fans following the highly controversial takeover by Malcolm Glazer in 2005.

Salford are understood to be keen on the idea of Giggs and Neville investing in the club as it could bring them sponsorship revenue which is otherwise scarce outside of the Football League.

Neville, who retired in 2011, is understood to have come up with the idea of investing in Salford and Giggs is also keen on the project.

The duo hope fellow class of '92 members like Paul Scholes and Nicky Butt will also help out in some way.

Scholes was born in Salford while Giggs lived there during the very early stages of his United career.

It is believed Neville wants to set up an academy at Moor Lane and build a new clubhouse.