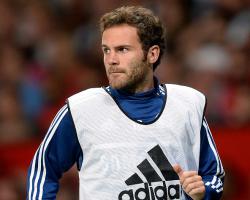 In the wake of stories suggesting an approach for the Spain international was imminent, United have denied making a bid.

However, with almost two weeks left before the transfer window closes there is still time for United to possibly try and make the kind of addition many fans have been crying out for.

During his commentary of the Red Devils' 3-1 defeat at Chelsea on Sunday, Neville outlined a view that his old club needed at least three players to lift flagging morale, but in the difficult January window, getting them would be virtually impossible.

Mata's desire to cement a place in Spain's World Cup squad, having failed to secure a regular starting berth under Jose Mourinho at Stamford Bridge, may make the situation far easier in his case, even if Chelsea, rebuffed twice in their attempts to sign Wayne Rooney last summer, may wonder why they should do business with the Old Trafford club.

It has been suggested Neville does not believe it is a good idea either.

However, in a series of Tweets this morning, England's assistant coach has clarified his view.

"Does he fit in with what I would call the typical philosophy of Manchester United? I would say no," said Neville.

"Positives of signing a player like him are obvious-lift everyone (spark) creativity, knows PL, 4th place chances go up - fantastic player."

On Sky's Monday Night Football show, Neville outlined why he felt Mata's arrival would not immediately fit with the manner in which United generally approach their transfer business.

"Maybe they have to change the philosophy and maybe that's what David Moyes is thinking. Maybe he wants to play narrow wide players and maybe a three in midfield.

"He's obviously a fantastic football player, there's no doubt about that, but one thing it does do, I suppose, is that David Moyes, Manchester United and Ed Woodward need to sign a big player.

"They need to make a noise and if they get him in it will attract potentially other players - and they need three or four players.

"What it could be is the start of something to lead to other things, but typically I wouldn't say he fits."

With a blank weekend following Wednesday's Capital One Cup semi-final second-leg with Sunderland, Moyes is expected to embark on a scouting mission in an effort to bolster a squad languishing in seventh spot, and in danger of failing to qualify for next season's Champions League.