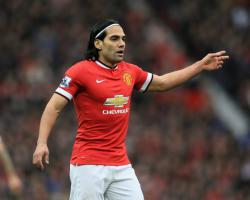 Falcao's indifferent form has led to suggestions that his future lies elsewhere and Vasilyev revealed on Tuesday that United are keeping their options open, for the moment at least

"I saw Manchester United leaders last Sunday and they have not yet decided if they will exercise the option (to sign Falcao permanently," Vasilyev told French daily newspaper Nice-Matin

We are not in any further negotiations for the moment, even if big clubs are interested

"The decision is in Manchester, then we will talk the player to find out what he wants."