No guarantees from De Gea agent 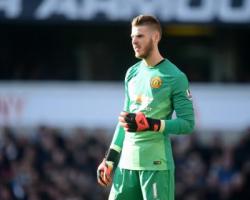 When asked about De Gea's situation on Thursday and the prospect of a switch to the Bernabeu, Mendes said according to newspaper Mundo Deportivo: "I do not know the future, things change every five minutes

We all know that in football nothing is impossible."

Mendes, agent to a host of world stars including Cristiano Ronaldo, was speaking at an event to launch his own autobiography.

He added of De Gea in Marca: "David is a Manchester United player and has a contract

You have to respect that."

De Gea, 24, is contracted to United until the end of next season.

At the same event, Mendes predicted former United man Ronaldo, who turns 30 next month, could play on for Madrid for another decade.