No guarantees from Van Gaal 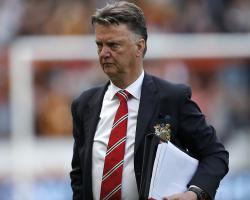 Schweinsteiger, Morgan Schneiderlin and Matteo Darmian were unveiled as United players on Wednesday night at a press conference in Seattle.

Sitting alongside the trio was Van Gaal, who wasted no time in reminding his new players that much hard work lies ahead for them in the coming months.

Van Gaal knows Schweinsteiger well, having managed the player for two years at Bayern Munich, but that seems to count for little in the Dutchman's eyes.

The Germany captain may be one of the most decorated players in the game but he still has to fight for his future and the same goes for Van Gaal too, it seems.

"In top sport, no position is secure - even my position," the United boss said.

"The players have to fight - Morgan has to fight with Schweinsteiger, (Michael) Carrick and (Daley) Blind to play in midfield.

"Matteo has to fight with (Antonio) Valencia."

Schweinsteiger, an eight-time Bundesliga winner, may be the most high-profile addition but Van Gaal expects ÃÂ£24million man Schneiderlin to adapt to his surroundings quicker than any of his new team-mates.

"The question with Bastian Schweinsteiger and Matteo Darmian is whether they can prove it.

"But I have full confidence they can."

In Schweinsteiger he appears to have ticked both of those boxes.

The 30-year-old cut a far more physically imposing figure than any of the three men sitting beside him at the press conference at the team hotel in Bellevue on the outskirts of Seattle.

Another box he ticks is that of born winner.

"I want to win titles," said the German, who spent 17 trophy-laden years at Bayern Munich prior to joining United.

"I am used to winning titles and so are United and that is my goal."

Those words will have gone down well with the United fans whose only midweek cup action last year came against MK Dons, Cambridge, Stoke, Burnley and Newcastle.

This season, United could be facing the likes of Bayern, Real Madrid and Barcelona - providing they come through a Champions League play-off in August.

That United have completed the transfers of Schweinsteiger, Schneiderlin, Darmian and Memphis Depay before the start of their tour has gone down well with Van Gaal.

"I only buy players who can make a contribution - we are not buying just for buying," he said.

"The difficulty is to get these players

It is not so easy and I am very proud that (executive vice-chairman) Ed Woodward has done that.

"When United come in, (teams) always ask for more money.

"I am very happy they are here before the tour, so we can prepare.

It is much better than last year."

United have wasted no time in getting rid of the players Van Gaal deemed surplus to requirements.

Robin van Persie will join Nani at Fenerbahce once a fee has been agreed and Van Gaal candidly revealed Victor Valdes will be sold after claiming he refused to play for the reserves last season.

Rafael, who has been left out of the 26-man party for the four-match tour of the US, will also be sold.

Van Gaal feels Darmian, a ÃÂ£12.7million signing from Torino, is more capable of defending than the Brazilian.

"I always want a player who can defend in the first place," he said about the signing of the Italian.

"When you are a right full-back, you must defend and cooperate with your fellow defenders."

Given his limited English, Darmian could only offer a brief explanation of his ambitions.