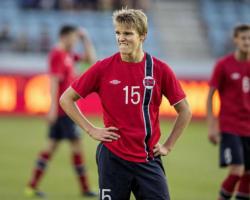 But the midfielder's dazzling dribbling and anticipation is being matched by his discretion about where he will go and when.

"There's been a lot of noise surrounding Martin and we decided to not contribute to it by refusing to feed the rumours," his father Hans Erik Oedegaard, himself a former professional, told AFP.

"The only thing that matters is that he can develop as a footballer," the father added.

Oedegaard, already a Norwegian international, fuelled speculation about a move from his hometown club of Stroemsgodset by going on a grand tour of Europe's football giants in England, Germany and Spain around his 16th birthday on December 17.

While the professed Liverpool fan trained at and carefully inspected facilities, press reports had him linked one day with Ajax Amsterdam and the next to Real Madrid in a 12 million euro ($14.3 million) deal.

Norwegian media said that Oedegaard and his father were again in the Spanish capital on Wednesday for talks with Real Madrid.

He could also plump for Bayern Munich, whose president Karl-Heinz Rummenigge has named him "the talent of the century."

Like Barcelona forward Neymar, another former wonderkid, the Scandinavian is spoiled for choice

"He has a future wherever he goes," said Barcelona coach Luis Enrique.

The Catalan club would like Oedegaard but they are banned from signing players until January 2016 after breaching rules on signing under 18s.

More than 30 clubs have expressed an interest: Manchester United and City, Arsenal and Borussia Dortmund are also on the list

But English Premier League leaders Chelsea are not among them.

Chelsea manager Jose Mourinho said he would not get involved in an "auction" for the teen.

I want to know what club it is going to be, but we will not go into battle with all these clubs."

It has been less than a year since the left-footed Oedegaard's talent first came to light.

In April 2014, he started playing for Stroemsgodset, in his home town of Drammen, where he became the youngest player and scorer in the Norwegian Premier League

In 23 games he has five goals and seven assists under his belt.

Videos of the young player running rings around opponents have gone viral and soon came to the attention of Norway's national team.

In August, Oedegaard wore Norway's red and blue shirt for the first time in a friendly against United Arab Emirates, aged just 15 years and 253 days, a national record.

In October, he became the youngest player ever to appear in a European Championship qualifier, coming on as a substitute in a match against Bulgaria.

"He has developed enormously in a short time

He brought down barriers that I think neither he nor anyone else imagined would fall," Norway manager Per-Mathias Hoegmo told the Aftenposten daily.

"His way of playing, his talent, his ability to make choices and think, all of this is impressive," he added.

However, even though the appeal of joining a Champions League club may seem irresistible, some are recommending Oedegaard, technically still under contract with Stroemgodset for the 2015 season, wait to gain more playing time and develop his skills.