Manchester United caretaker manager Ole Gunnar Solskjaer celebrates his 46th birthday today (26th February 2019), hard as it may be to believe for those of us that grew up in the nineties.

Here's a look at 11 of his greatest United moments... Having missed out on the £15m signing of Alan Shearer in the summer of 1996, United turned to Solskjaer as a £1.5m alternative and were quickly pleased with their little known purchase.

The Norwegian made his debut as a substitute in the third Premier League game of the season against Blackburn Rovers and scored within six minutes of coming off the bench. That strike from the newly dubbed 'baby-faced assassin' earned United a point in a 2-2 draw. Solskjaer's debut goal proved to be the first of many in the 1996/97 season as United successfully retained the Premier League title. His 19 goals in all competitions - 18 in the league - saw him finish as the club's top scorer ahead of Eric Cantona.

He was also the first new signing to finish a debut season at United as the club's outright top scorer since Brian McClair in 1987/88, nearly a decade earlier.

The affection for Ole Gunnar Solskjaer amongst Man Utd fans is not just because of his goal in 1999. Arguably, more important was his red card against Newcastle in 1998.

It wasn't a brilliant moment in terms of being a remarkable achievement, but the famous red card shown to Solskjaer in a 0-0 draw with Newcastle in the closing stages of the 1997/98 season brought the player even closer to United fans.

With United desperately needing a win as they battled Arsenal for the Premier League title, Solskjaer scythed down Newcastle's Rob Lee through on goal, sacrificing himself in the hope that the team could still go on and win the game and keep the season alive.

The signings of Teddy Sherginham and Dwight Yorke in 1997 and 1998 respectively dramatically increased the competition for places in the United squad. It meant that Solskjaer was limited to the role of 'impact sub', but it was something he thrived in.

One particular game against Nottingham Forest in February 1999 stands out as one of his most famous contributions in a United shirt. The team were cruising at 4-1 when Solskjaer arrived late in the second half, but he personally scored another four in just 13 incredible minutes. Above all, Solskjaer's single greatest moment for United was the winning goal in the 1999 Champions League against Bayern Munich in one of the most heroic comebacks in football history and sealing the most incredible of trebles.

Earlier that season, Solskjaer had netted a later winner against Liverpool in the FA Cup fourth round that proved crucial to the treble success, but his outstretched boot at Camp Nou was an even bigger moment that will never be forgotten. 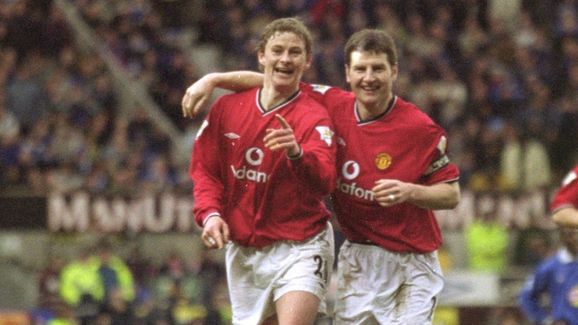 Although he was still scoring at least 10 Premier League goals per season, Solskjaer continued to play second fiddle to Dwight Yorke and Andrew Cole. But the 2001/02 campaign and the arrival of Ruud van Nistelrooy brought him back into the picture in a big way.

United didn't win anything, yet on a personal level Solskjaer scored 17 times in the Premier League, his best tally since his debut year. He managed 25 in all competitions, his best ever single season haul for United. Solskjaer's versatility proved key to United in 2002/03 as they wrestled the Premier League title back from Arsenal. He began occupying a right wing role and even kept David Beckham out of the team.

The Norwegian started 29 Premier League games that season and was rewarded with his fifth Premier League title. He played in a monster total of 57 games in all competitions, which was second only to Ryan Giggs (59) in the whole squad. After 2003, Solskjaer was blighted by knee injuries for nearly three years. Having suffered his first serious problem in September 2003, he went on to miss the entirety of the 2004/05 season and played only five times during 2005/06.

Finally, he was back fit for the 2006/07 campaign in a new look United team. Though only a fringe player, his contribution was still invaluable, with a brace in a 2-0 win over Newcastle standing out. United finished with another Premier League title, Solskjaer's sixth and last. Having hung up his boots in 2007 at the age of 34, Solskjaer was given an Old Trafford testimonial in 2008 attended by nearly 70,000 fans. He then took charge of the club's reserve team until 2011, before taking his managerial career home to Norway with Molde.

Solskjaer returned to Old Trafford as a visiting manager in January 2014 after taking a job at Cardiff and received a warm welcome from adoring supporters. United won the game 2-0. With Jose Mourinho sacked, Solskjaer was drafted in as United caretaker manager in December 2018. He was tasked with steadying the ship and restoring pride after the toxic reign of his predecessor had reached breaking point.

The new era began with a 5-1 thrashing of Cardiff that couldn't have been any further removed from the Mourinho regime. The goals started flowing after just three minutes, the players looked happy to be wearing the shirt again, and the 'United way' was back. Solskjaer won all of his first eight games in charge, including games against Tottenham and Arsenal, to set a new club record. He later suffered defeat for the first time against PSG in the Champions League, but was able to rouse his squad to comfortably beat Chelsea days later.

Solskjaer's tactical system in that game shut down Chelsea's strengths and exploited their weaknesses. He has had to deal with critics claiming anyone could have replaced Mourinho and enjoyed similar success, but the Chelsea victory showed there is so much more to him.