​Ole Gunnar Solskjaer labeled Scott McTominay as a 'leader' in his side as Manchester Untied overcome a plucky Leicester 1-0 at Old Trafford to secure the Red Devils a much-needed three points on Saturday.

Three matches without a win had left Solskjaer's men in desperate need for a victory, and a first-half Marcus Rashford proved to be enough as the hosts saw off a previously unbeaten Foxes side despite being hit by a number of injuries to the first-team squad.

Speaking after the game, the Norwegian expressed his delight at securing the win - despite coming under heavy pressure during the latter stages - while also praising Rashford's mentality after netting the game's only goal from the spot having missed a penalty in the previous home match.

On the 'Excellent' Scott McTominay Against one of the division's strongest midfield trios, McTominay looked assured and confident as the 22-year-old stood up to the task, and earning lavish praise from his manager for his performance.

“I thought McTominay was excellent. He lost the ball a few times, but you expect that because he’s still learning his role," Solskjaer told the club's ​official website. "He goes into tackles and he’s a leader. I wouldn’t want to go into a 50-50 with him! I thought he did excellent all day.”

Those sentiments were echoed by United supporters, who took to Twitter to express their feelings, with swathes of praise heading the midfielder's way for an superb showing in the centre of the park.

McTominay truly truly has outplayed every Leicester midfielder today. All of them. And by a long mile. Pure dominance today.#mufc

Man of the match for Scott McTominay. Monster of a performance from the midfielder! Winning free-kicks, pinging passes, intercepting play he did it all today ⭐️ #MUFC pic.twitter.com/GJX0iXXLae

On How United 'Needed' the Win Previous results had meant victory was essential on Saturday to ensure the club didn't fall further behind their top six rivals, although Solskjaer insisted their performances hadn't yielded the results they deserved of late.

“There were many reasons why we needed a win today. For the boys, that they can see what we’re doing is the right way. I thought the first 20-25 minutes were excellent. Then, of course, we played against a good team as well and they made it hard for us and we made it hard for ourselves with some bad decisions," he said.

No match is perfect, however, and the 46-year-old stressed that his side made mistakes on the ball, but hailed their defensive work after ​Leicester saw plenty of the ball against the Red Devils.

”We were a little bit sloppy on the ball, but we had to defend and today is probably the first time this season, apart from some parts of the first half against Chelsea, that we’ve had to defend deep against a team that was pushing us, but I never felt under any real, real pressure. They didn’t create too many big chances in that second half, even though they had the ball.“

On Marcus Rashford's Mentality After Putting Away His Spot-Kick 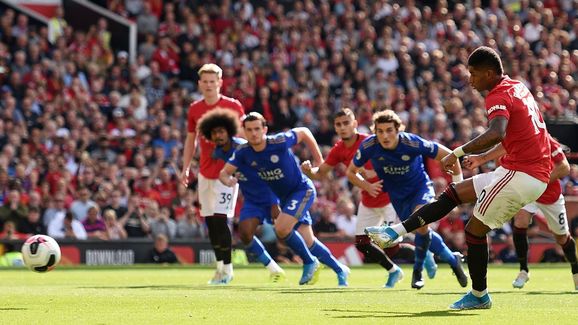 “He’s been practising penalties and he can go both ways. He can go through the middle, he was calm and we’re going to get more of them, no doubt about it, because we’ve got players in the box with quick feet and, with VAR now, there’s no chance you’re not going to get them, even though we haven’t got every penalty we should have. Going forward, I think we’ll see him slot in a few more," he said.

As a former striker himself, Solskjaer is fully aware on the difficulty involved in taking penalties, reassuring Rashford that failing to convert is no reflection of your talent as a footballer.

He added: "Every striker misses a penalty. I’ve seen [Diego] Maradona and [Lionel] Messi do it. I’ve seen Platini against Brazil and Zico - my favourite player of all time - missed in the same game. You’ve just got to be confident enough to step up next time. What’s the worst that can happen?“ While Solskjaer has claimed that his side's performances should have yielded better results, he maintained that victory over a resurgent Leicester side is just another three points and nothing to be carried away with.

"It's the same when you coach and you manage. We don’t get carried away when we win a game that we don’t deserve to, and we don’t get down in the dumps when we don’t win games that we should."

Europa League football is next for United, as they host

"The performances have been miles better than this and, today, we just have to accept the three points and wake up with a smile, have a day off and relax a bit and look forward to next week.”