Paul Pogba: Why Man Utd Star Shouldnt Be Rewarded With PFA Team of the Year Nod

The PFA Team of the Year is voted for by the players themselves and if his there is a consensus among his fellow professionals that Pogba is one of the Premier League's best 11 players this season then it would appear that he is worthy of his place. He has clearly done enough to impress his peers, either directly in games against them, in other games they've watched, or through conversations they've had with other players.

Has Pogba been good this season? Yes, great even at times. But has he been consistent? Not at all.

Pogba is undoubtedly one of the most talented central midfield players in the world, that much is clear. Those flashes have yielded 16 goals and 11 assists in all competitions this season and it has been by far the most prolific campaign of his career.

But there is a feeling, certainly among many frustrated fans, pundits and other onlookers, that the languid Frenchman could still be so much better if would only work that bit harder.

The jury is still out on why he doesn't work hard. Perhaps United just isn't the right club for him and he can't better perform any better, or that may be what he tells himself. Notwithstanding that does occasional quality alone actually warrant a place in the PFA Team of the Year? Pogba was disappointing against Manchester City at Old Trafford on Wednesday as United lost for a seventh time in nine games to propel their closest rivals to the brink of the Premier League title.

There were moments, just moments, when he looked good. But he was also slow and ponderous, too often made poor decisions on the ball, appeared to be far short of giving it his all and generally looked as though he would rather be pretty much anywhere else. It is not new.

There was a particular instance that seemed to sum it all up when Pogba was beaten to a header by City winger and PFA Players' Player of the Year nominee Raheem Sterling.

Closer to the ball and with a sizeable strength and six-inch height advantage over his opponent, Pogba had control of the situation, or at least he should have done. But his weak attempt at a jump was no match for Sterling, who leapt higher and won back possession for City. 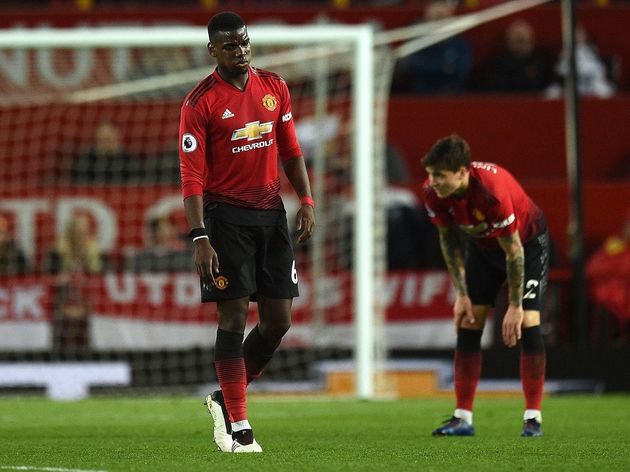 Here were two incredibly talented footballers competing for the same ball, but it was a non-contest because they are currently at such different levels. One is absolutely flying, in this case literally momentarily, because he is working harder than he ever has done before and is reaping the rewards. The other is stagnating because he rarely seems like he's even trying.

When Pogba plays it often looks as though he wants it to be effortless, for people to marvel at how easy he can make even the most difficult pass, run or shot appear. But there are other things that people expect to see from top players, things that he doesn't do.

Pogba rarely sprints back to help his teammates in a defensive capacity, he has no interest, and his mentality appears focused on looking good rather winning at all costs. That is why he seems incapable of rousing himself in difficult games against opponents who are able to stifle him and his output. Top players will always find a way to perform, even in the face of adversity. What's more, they raise the game of others around them. That isn't Pogba.

He plays well if other play well and not the other way around. It is something he has been spoiled with a France national team that includes N'Golo Kante and Blaise Matuidi.

The 26-year-old apologised for a 'disrespectful' performance in the wake of United's 4-0 utter humiliation at the hands of Everton last weekend.

As far as former United captain Roy Keane is concerned, those words mean nothing. "I wouldn't believe a word he says. I don't even think he believed what he was saying there," the seven-time Premier League said after seeing Pogba's interview prior to kick-off in the Manchester derby.

 "I wouldn't believe a word he says!"

Roy Keane did NOT hold back when asked for his opinion on Paul Pogba  pic.twitter.com/GuaGUDqhjF

Speaking in the Sky Sports studio, Keane went on to say, "He's on about being a team-mate, if you're going to be a good team-mate you've got to run back when you're defending. He's talking about body language - but throws his hands up in the air. He's a big problem for United.

"He's a senior player, played in big competitions and won big trophies. I don't think he leads by example, from what I see. I don't know what he's like on the training ground or when they're travelling, but from what I see.

"He mentioned pride, but I don't see it in his performances. My eyes don't lie to me." It is hard to disagree with Keane, a player who put everything into every performance during his own career and was frustrated and angry when he felt others did not do the same.

Innate talent will only take Pogba so far. But to make that next leap and reach the elite bracket of world class players he has to give so much more in other ways. Perhaps producing occasional flashes is enough to get into the PFA Premier League Team of the Year, but it shouldn't be.