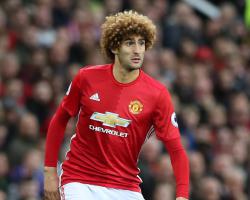 Fellaini was roundly criticised for that hasty challenge and was reminded of United fans' displeasure when brought off the bench in the dying minutes of Sunday's 1-0 win against Tottenham.

The Belgium international was booed by large swathes of supporters, but centre-back Jones believes his team-mate can cope with the negativity.

"It is disappointing but he is a strong boy," Jones said.

"He is mentally strong to cope with that don't worry

He's strong enough mentally to deal with it

We know what he is good at and he has to carry on.

"That's what he is there to do

He does a good job for us

He has to put it aside."

Jose Mourinho refrained from criticising United fans after the match, although dedicated the Spurs win to his under-fire midfielder.

"I want to dedicate this victory to Fellaini because he deserves it," the Red Devils boss told Sky Sports.

"In the last match, it was him that was involved in the loss of two points, and that's why I want to make it clear he is an important player for me.

"The fans can do what they want and they have been phenomenal with us.

"I just have to thank them for everything they are giving us, especially in the period where we are not giving them too much so I am really happy with them."