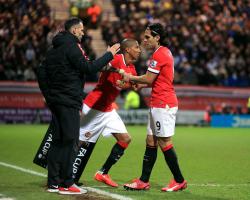 The global players' union conducted a poll across continents with 84 per cent of its members supporting the idea.

Football's rule making body the International Football Association Board has twice rejected proposals that would allow an extra substitute to be used during extra time of knockout matches, referring it back for further analysis to an advisory panel.

FIFPro said on its Twitter account that 244 players from 27 countries took part in the survey and 39 (16 percent) said they were against a fourth substitution while 205 (84 percent) supported the idea.

Fifpro Secretary General, Theo van Seggelen said in a statement: "The response to our survey is overwhelming; whether only applied to extra-time or during the regulation 90 minutes, professional footballers worldwide surveyed by FIFPro see a need to add a fourth substitute

"It's a position that will challenge traditional views, but the players have one of the most important roles in this debate.

"Our research is representative of players on all continents and they have clearly shown a preference for the game to evolve and show greater flexibility, especially during matches that go to extra time."