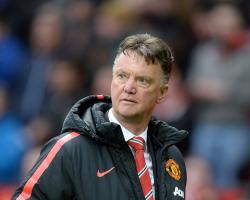 The exact format is yet to be announced, although the tournament will take place between July 11 and August 5

The finish date would clearly be untenable for United and Chelsea considering next season's Premier League kicks off three days later on August 8 - but United boss Louis Van Gaal is believed to have sought assurances on the scheduling.

Van Gaal was heavily critical of United's three-week, five-match schedule last year, decrying the "dreadful distances" and adding: "it is not very positive for a good preparation."

The Dutchman has reportedly insisted this summer's tour be cut to two weeks and that United's stay in America does not extend into August, due to the early start to the domestic season

Last summer United played Real Madrid in front of a record crowd of more than 109,000 - plus Inter Milan and Roma before beating Liverpool in the final

Real Madrid will not be involved this time - the Champions League holders will be taking part in a sister tournament in Australia along with Manchester City.