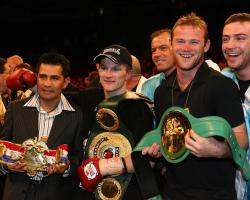 The Sun claims the footage was shot in Rooney's kitchen on February 22 - the day after Manchester United's 2-1 defeat to Swansea.

In the video, the two former team-mates pull on boxing gloves and trade blows as they spar in Rooney's Cheshire mansion.

Stoke defender Bardsley then catches Rooney square in the face with a left jab, sending the United and England skipper plummeting to the floor.

Rooney lays prostrate on the floor and the video comes to an abrupt end.

Rooney is due to lead United out at Old Trafford this afternoon for their Barclays Premier League match against Tottenham.

The club refused to comment on the video when contacted by Press Association Sport on Sunday morning and Rooney's representative did not return calls.

The reaction to the incident was a mix of disappointment and humour.

Former Birmingham and Sheffield United midfielder Curtis Woodhouse - who swapped football for boxing and became the British super-lightweight champion - saw the funny side of it, posting on Twitter beside two pictures of himself boxing and playing football: "Some can, some think they can ?? #Rooney..

not everybody can do it!!! it's not as easy as I made it look #RooneyRooneyRooney."

When asked by one Twitter user whether he would consider fighting Rooney for charity, Woodhouse replied: "when he wakes up maybe"

Rooney has spoken of his love for boxing in the past.

The 29-year-old is friends with Manchester fighter Anthony Crolla and super-middleweight fighter Paul Smith from Liverpool.

He once also carried Ricky Hatton's belt into the ring prior to his fight against Jose Luis Castillo in Las Vegas eight years ago.

Rooney started boxing when he was in the youth team at Everton and revealed last November he would have considered taking the sport up professionally if he had not made it as a footballer.

In 2008, Rooney said of the sport: "I've always loved watching boxing and I went boxing training for about three or four years when I was younger

It's a sport I've always been involved in.

But Everton who I was with at the time, said I had to concentrate on one of them and I opted for football."