Rafael- Players to blame for slump 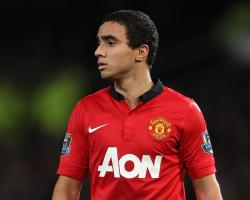 United finally got their first victory of 2014 at Old Trafford on Saturday as second-half goals from Antonio Valencia and Danny Welbeck proved enough to overcome Swansea.

Yet the three successive defeats that preceded that success condemned the Red Devils to an early exit from the FA Cup, gave them a first-leg deficit to overcome in a Capital One Cup semi-final tussle with Sunderland and left them with ground to make up just to claim a place in next season's Champions League.

Manager David Moyes has taken most of the flak for United's stunning fall from grace, the depth of which even the Scot has admitted caught him by surprise.

Rafael thinks it is time the players took their fair share too.

"I agree with that sentiment 100 per cent," said the Brazilian.

"We are the ones who have to take the responsibility.

"I don't know why everyone is looking at the manager. It is the players who have to do the job on the pitch."

Rafael makes no excuses in the massive upheaval created by Sir Alex Ferguson's exit last summer, insisting there is enough quality at Old Trafford to smooth out any teething problems.

"We knew there would be a change," he said.

"The manager had just left after 27 years and it was always going to be hard.

"But David Moyes has a strong mentality. He is doing his own job. We have to use that in a positive way."

With the club's board giving no sign of their belief being shaken in a man they handed a six-year contract to last summer, if the players do not shape up, it seems likely they will be the ones being ushered through the exit door.

For some - Rafael's fellow countryman Anderson and maybe even twin brother Fabio - it already appears too late.

Others have work ahead of them.

"We have spoken about it a lot," said Rafael.

"We have to show our quality. People are saying United don't have a good squad. We have to prove it is not true."