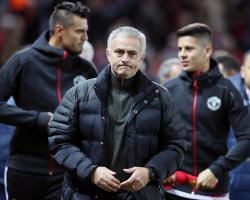 The Old Trafford club may have left it to the last game to qualify second in Group A behind Fenerbahce but they have by far the strongest squad in the competition and if they hit form they will be unbeatable.

Southampton failed to make it into the knock out stage with a 1-1 draw at St MaryÃâs that saw opponents Hapoel Beer Sheva progress.

This season it is probably Manchester UnitedÃâs best chance of silverware, TottenhamÃâs too.

Back in the day English clubs dominated when it was known as the UEFA Cup (previously the Fairs Cup), bringing the large trophy back to British shores 6 years on the trot between 1967 and 1973. The finals were played over 2 legs, home and away, until 1998.

Here is a list English clubs winning the competition:

If Mourinho can find his best team United have a great chance of entering the pantheon of clubs that have won all three major UEFA trophies, which include the European Champion Clubs' Cup/Champions League, UEFA Cup/Europa League and the Cup Winners' Cup

The last English club to win the Europa League/UEFA Cup was Chelsea in 2013 who added it to their 2012 Champions League trophy and the 1971 Cup WinnerÃâs Cup to join the select group.

The other clubs to win all 3 competitions are: