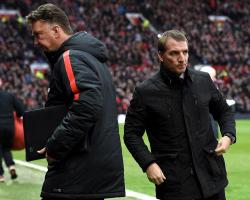 When the pair last met back in December at Old Trafford United won 3-0, a result which bizarrely actually had more of an effect on the beaten visitors.

They have not lost in the Premier League since and, ahead of the clash at Anfield on Sunday, the perception of Liverpool - and Rodgers - has changed completely

That loss against United was the last in a run of eight matches which brought just eight points and left Liverpool in 10th place, seven points off fourth.

However, after taking 33 points from a possible 39 they are just two points behind United, who occupy the final Champions League spot, and only four adrift of second-placed Manchester City before the weekend and they have the air of a team finishing the season strongly.

United, by contrast, are still failing to impress in Van Gaal's first season in charge despite their league position with many questioning whether he actually knows what his best side is and whether he is getting the best out of the talent he has at his disposal.

But Rodgers believes that should not reflect badly on the Dutchman.

"I don't think there is any convincing (required)

He has shown over his career that he is a top-class manager," he said.

"He will have seen, coming into this country for the first time, the challenges of this football - it is why it is the most competitive league in the world.

"The Premier League is different from the leagues he will have worked in before but I don't think you can argue with his credentials.

"There is no question about the philosophies he has put in place at Ajax or Barcelona or his achievements and when he leaves Manchester United he will still be one of the great managers."

Rodgers found himself under similar scrutiny after Liverpool's poor first half of the season but things have turned around and he is flavour of the month once again.

He admits August to December was a tough period for him, when his methods were being called into question, but believes he has come out the other side stronger for it.

"I've said to coaches and players that when the criticism comes, deserved or undeserved, you won't like it but you have to accept it as it is part of the game," he added.

That won't fit with results but it is quite easy, you have to stay focused.

"You know you are going to get it at some stage and in your career it is important you come out the other side.

"I am early in my career as a manager but that period benefited me.

"It is the challenges of being a manager at any level, you are scrutinised but you have to stay calm and believe in your qualities as a coach and manager."

Liverpool are the top-flight's form team at the moment but Rodgers will not be taking United for granted, whatever the critics say about their performances this season.

"They have a lot of talent and made a lot of investment in world-class players in the summer and they have an outstanding manager," he said.

"They have been up there all season and will want to stay there so we have to stay on the chase but I don't worry about them 'clicking'.

"It is an important game

These games in particular are always great spectacles and the rivalry is historic.

I don't think the result will have an overriding factor (on the race for the top four) because there are a number of games to go but psychologically it can give you a great boost."