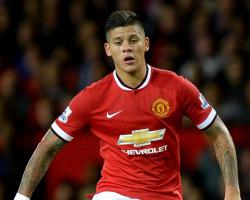 United were beaten 1-0 at the Etihad Stadium in the reverse Barclays Premier League fixture in November.

But Rojo has every belief Louis van Gaal's men will gain their revenge towards the end of a campaign in which he sees making the top four to earn a route into the Champions League - they are currently fourth - as the "minimum objective".

The 24-year-old Argentina international wants a decent run in the United team for the rest of 2014-15 as well after missing the last seven games with a thigh injury, and has also set his sights on claiming major silverware with his club, if not this year then over the next few seasons.

"It's vital we win the next Manchester derby at home in front of our own supporters - I think we are going to win that one," Rojo said in the new issue of Inside United magazine.

"As for expectations from now to the end of the season, well, to try and give my absolute best in every game until the end, and hope that we pick up some good results along the way so we can be in with a shout in the shake-up for the title."

Rojo, who joined United last summer on a contract to 2019, added: "My minimum objective this year is to qualify for next year's Champions League.

That and a league title is what I really want to win."