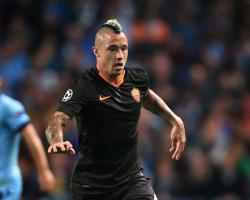 But Nainggolan, 26, stressed on Twitter that he has been training in Rome, effectively denying claims in newspaper Leggo he made a trip this week to the north of England.

He wrote: "To be training and be placed somewhere else is hard."

At the end of his tweet, he including three laughing emoticons.

Nainggolan has scored three goals in 28 league appearances for Roma this season.

The 26-year-old joined Roma from Cagliari in January 2014 and is under contract until June 2018.

Nainggolan is expected to start for Roma in Saturday's Serie A match against Inter Milan at the San Siro.

Roma are third in Serie A and hold the last Champions League qualifying spot with seven games remaining.